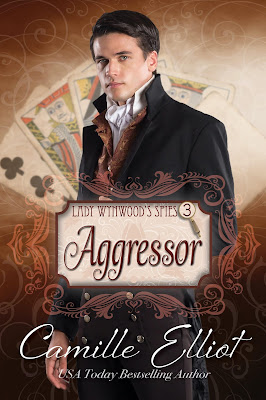 The ebook version isn’t live yet, but the paperback version of my latest book, Lady Wynwood’s Spies, volume 3: Aggressor, is now live on Amazon!

Here’s the back cover description:

With the help of his team, Mr. Michael Coulson-Jones has overcome the deadly Root elixir that turned him into a monster. But now that they know more about the deadly potion, he is faced with an inevitable truth—unless he agrees to the risk of taking more, he will eventually die.

In the meantime, a beautiful, infamous French spy and her group of thugs have landed on English soil, intent on stealing the mysterious plant that Apothecary Jack uses to control his underworld empire. They play a deadly game of hide-and-seek with Michael’s team amidst the rookeries of London.

Then one of the team is afflicted by a savage, insane rage after exposure to the strange pollen of Jack’s plants. The team must not only battle the French spies and Apothecary Jack, but also a sickness of the mind tormenting one of their own.

PLEASE NOTE: This is the third book in the Lady Wynwood’s Spies series, an epic serial novel. Each volume has a completed story arc, but this is NOT a stand-alone novel and the story continues in volume 4.

The end of book 2 ended on a cliff-hangy note, so I hope you enjoy book 3!

February 01, 2023
I’m posting a Humorous Christian Romantic Suspense serial novel here on my blog! Year of the Dog is a (second) prequel to my Warubozu Spa Chronicles series. Year of the Dog serial novel by Camy Tang Marisol Mutou, a professional dog trainer, is having a bad year. While renovating her new dog kenneling and training facility, she needs to move in with her disapproving family, who have always made her feel inadequate—according to them, a job requiring her to be covered in dog hair and slobber is an embarrassment to the family. She convinces her ex-boyfriend to take her dog for a few months … but discovers that his brother is the irate security expert whose car she accidentally rear-ended a few weeks earlier. Ashwin Keitou has enough problems. His aunt has just shown up on his doorstep, expecting to move in with him, and he can’t say no because he owes her everything—after his mother walked out on them, Aunt Nell took in Ashwin and his brother and raised them in a loving Chri
2 comments
Read more