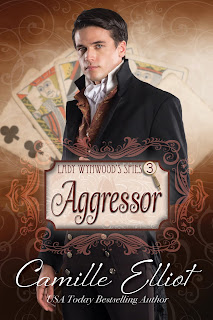 The 3rd book in my Lady Wynwood’s Spies series releases this month! For this book, the model on the cover is supposed to be the character, Mr. Michael Coulton-Jones.

I absolutely love this cover model! His name is Anatolii and here’s the original stock photo. It was really tough to try to decide which photo to use for the cover!

It was a tossup between him and Phoebe for the cover for book 1, but I eventually went with Phoebe. Then in book 2, he was kind of out of the picture. Now that he’s back, he’s on the cover of book 3, although it’s kind of weird because he’s one of the main characters but he doesn’t show up on a cover until book 3.

Once again, Thorne could have been on the cover of the book but he was nixed! Poor Thorne. :( However, I have other books planned that give him and Isabella more page time, so I’ll have them on a cover eventually!