Update August 2008: I wrote up the pattern for this with "improvements"! Here's the link to my No Cold Bums toilet seat cover!

Okay, remember a few days ago I was complaining about the cold toilet seat in my bathroom? Well, I decided to knit a seat cover. Not a lid cover, but a seat cover.

I went online and couldn’t find anything for the seat, just one pattern for the lid by Feminitz.com.

However, I took her pattern for the inside edge of the lid cover and modified it to make a seat cover. Here it is! 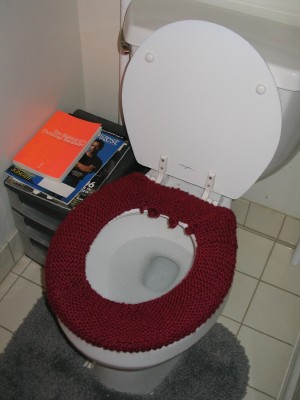 It’s really ugly stitch-wise because originally I made it too small and had to extend it a couple inches on each side. I figured I’d be the one staring at it, so who cared if the extension wasn’t perfectly invisible?

I used acrylic yarn since, well, that’s what I had, and also because it’s easy to wash. I’ll probably have to wash this cover every week or so, but it’s easy to take off—I made ties which you can see near the back of the seat.

And trust me, I’m a biologist—a good dunking in detergent and water, and any bacteria is toast.

No more cold toilet seat! What do you think?

Update: Actually, it looks even uglier now because I added ties to the front of the cover since it was slipping, and the ties distort the shape a bit. But no more cold bum!