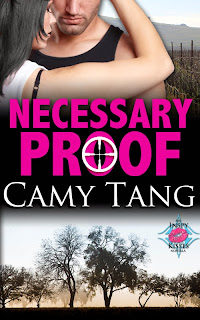 After opening his heart to Jesus in prison, Alex Villa has left his criminal past behind him. However, his efforts to take down a gang producing meth in Sonoma have made him a target. Set up to look like he’s being bribed by the gang, the police blame him for the death of a cop. Only the evidence on an encrypted laptop can prove he’s innocent.

Software engineer Jane Lawton has been betrayed by the men closest to her, including a God she thought would protect her. She won’t let Alex down, because she knows what it feels like to be disbelieved and abandoned.

However, the men after them have orders to repossess the evidence and make sure Jane and Alex take their knowledge to the grave. Can they prove Alex’s innocence before time runs out for them both?

** Those of you who have read Formula for Danger will recognize Jane and Alex as minor characters from that book. I was excited to finally be able to write their own love story!

Jane Lawton nearly dropped her steaming pot of Mac-N-Cheese at the sound of a powerful fist knocking at her apartment door. "Coming!" She spooned the gooey, bad-for-you goodness into a bowl, then ran some water in the pot in the sink.

The urgent knocking sounded again. Somehow it didn't sound like one of her neighbors, wanting Jane's help with a computer problem. She looked through the peephole.

She felt a sharp pulse at the base of her throat. "Alex?" She opened the door.

Normally a walking Calvin Klein ad, he now had a grim, serious cast to his face as he hurriedly entered her apartment with a messenger bag slung across one broad shoulder. "Quick, close the door."

"What's going on?" She locked the deadbolt.

It frightened her that he looked so different now, lacking his usual smile and dimples. "I need your help, Jane."

She couldn't control the bitterness that burned the back of her throat. It seemed that was the only thing she was good for, helping the men in her life so they could leave her and move on. She swallowed and said carefully, "Doing what?"

He pulled a laptop from his messenger bag. "There's information on this that I need, but I'm not sure if there's any type of security protecting it."

"Whoa." Jane took a step back. "You're saying that's not your laptop, and you want me to get into it? What's going on?" She knew he had been in prison for a few years, but she thought he'd put his illegal past behind him.

He scrubbed his hand over his high forehead. "It's not what it looks like."

"That makes it sound even worse."

He exhaled and seemed to study her. His intent, dark eyes made her squirm. She knew she'd changed a lot in the past year. She'd only spoken to him once in all that time, a few months ago at the party celebrating his brother's engagement to Rachel, Jane's second cousin but as close as a sister. After a minute or two of chit-chat, he had been quick to leave her to speak to Detective Carter, which had given her a pang even though she hadn't been in a sociable mood. What a difference from when she and Alex had first met years ago. He had seemed interested in her, but she'd been ...

She shoved the memories aside. "I'm only going to ask this one more time. What's going on?"

"Trust me with what?"

Print book:
You can only buy Necessary Proof in print copy in First Kisses, an Inspy Kisses novella anthology.
Amazon.com

Ebook:
The ebook is free on all sites except Nook (sorry about that). Nook owners can download the .epub file from Smashwords and side load it into their Nooks.
Smashwords
Kindle
iBooks
KoboNookbook (not free)