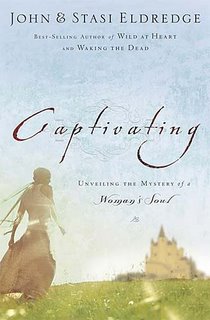 Haunted by a Question: Sorry, this is really long again. As before, some things I liked and some questions.

Eve—What Happened?
The authors say: “[Eve] brought strength to the world, but not a striving, sharp-edged strength. She was inviting, alluring, captivating.”

Then they talk about “Why do so few women have anything close to a life of romance?” In the guided journal, it asked, “Are you aware of loneliness deep within your heart?”

I kind of understand what they’re looking for. I know there are many women who bury their pain and it’s probably healthier for them to acknowledge it rather than deny it exists.

But on the other hand, I’m not very lonely in my life, and I felt like they were trying to make me look for places in my life where I’m discontent. And I don’t really want to start seeking out things just to complain about.

They mention how tired women are, and I do believe that’s true. Women, especially mothers, are striving to do their best for their children. All the mothers I know do a lot with and for their kids. It’s to their credit, but they always seem tired and overcommitted.

I don’t particularly feel tired. I really enjoy my work and the specific places where I volunteer. I guess maybe I’ve been good about not overcommitting myself.

A Woman’s Deepest Question:
Again, she mentions how girls like their twirly skirts and “capturing attention,” being captivating. I didn’t quite relate. I don’t like being the center of attention—anytime that happens, I turn beet-red, or else I’m having early hot-flashes.

I think it might depend on the personality of the woman. Some women were incredibly shy as children and didn’t like to call attention to themselves. Others loved the limelight or just being silly and girly.

So I didn’t feel like the “haunting question” of the chapter—Am I lovely? Am I captivating?—applied to me as much as it might to other women.

For me, a better question—which is similar, in some ways, to the lovely question—is: Am I important?

All my childhood fantasies were about women who were integral to the salvation of the space-time continuum, or the key to Enchanted Forest’s survival, or the top warrior of the Amazon tribe. They were important.

Maybe that’s why I wanted to be a writer. To be important. To influence and entertain at the same time.

Eve’s Fall:
I really like how the authors point out that the consequences of Eve’s disobedience—dominance by her husband—is NOT how their relationship was supposed to be. I had never thought of things that way. I knew in my head that a result of the fall was that men would “rule” over women, but it never occurred to me that the specifics of the punishment meant that God had never meant for this to happen this way.

They also mention how women are cursed with loneliness (relational heartache) and the urge to control, both of which I completely relate to.

The guided journal asks more probing questions about heartaches, worries, emotional aches, emptiness. I can’t say I have a lot of those—I have a few minor ones—but I’m sure many women DO have several of those, and for some women, it’s quite deep and painful.

Then they talk about women being guarded rather than inviting—but aren’t all human beings this way? Aren’t men guarded the same way women are?

They talked about women who over-control, and women who hide away. Both extremes. Both a result of not trusting God.

The guided journal asked, “In what ways are you a controlling, dominating woman?” I just laughed. I’m still laughing. I can’t even begin to count the areas in my life where I’m a control freak.

The authors say, “We are not saying that strength in a woman is wrong. Not at all. However, thanks to the Fall, far too many women use their strength in self-protective ways, ways that violate love, tenderness, and mercy. They forfeit their femininity in order to feel safe and in control.”

I can relate to that. But I guess I’m at a point where I already see that’s what I’m doing and I’m trying to stop it. I’m trying to trust God more, and fully. I’m not saying I’m succeeding at it, but I’m not in denial about it, either.

Indulging:
The authors discuss how women indulge to ease the pain. I agree with that, I know I do it. Food gives me intense pleasure, and I am constantly overindulging in that.

I did take offense that they lumped romance novels with soap operas, talk shows, gossip, and women’s magazines, which all “feed an inner life of relational dreaming and voyeurism that substitutes—for a while—for the real thing.” They did a sweeping generalization that romance novels were “cheap” and ways to indulge in fantasy. That women picture themselves as the heroine in order to feel winsome, beautiful, pursued.

Now, I’m sure that’s true for many women, but certainly not for all. I mean, raise your hand if you view your contemporary romance, or romantic suspense, or fantasy/chick-lit/thriller/women's fiction with romantic elements novels as just entertainment rather than a way to deal with life’s problems or emptiness?

Do women have to read a literary fiction book, or a Biblical fiction novel, or the Bible itself in order to not be labeled as emotionally needy? Come on, people.

The authors say, “All of our hearts are at some level unsatisfied and longing. It is our insatiable need for more that drives us to our God.”

I would hope that’s what it does. That when women become aware of their dissatisfaction, that they’d look to God rather than blame their spouses, children, friends, neighbors.

But do you hear my skepticism? I confess that when I become aware of dissatisfaction, my first reaction is to blame somebody. That’s not a godly reaction, but it’s my first.

I guess I need to trust God is in control and will point women to Himself, rather than worrying about women who start pointing to others.

Eve’s Lingering Fear:
The authors end the chapter by saying that both being over-controlling and hiding away are the products of girls whose Haunting Question—Am I lovely?—was wrongfully answered, and so they have grown up to be this way, wounded and believing lies about themselves.

I can definitely see how this would apply exactly to some women. It makes perfect sense, logically and psychologically.

The problem is, it doesn’t seem to fit me. I know I’m over-controlling. It’s part of my personality, just like Elisabeth Elliot when she wrote Passion and Purity. After reading that book, I, too, saw the need to submit my preconceived notions and my control to God.

(I had guy friends in college who hated that book because they felt it made women too submissive. I’m wondering if they had known too many women who were the other extreme of controlling—too submissive, hiding—and they didn’t want those women to validate their behavior. Whereas I was an Amazon with too much mind of her own, and needed Elisabeth Elliot’s message.)

I did grow up believing lies about myself, and maybe it was because my Haunting Question was answered wrongfully by the people around me. I really don’t know. I do know that after I gave my life to Christ, I started learning the truth about those lies, little by little.

Maybe that’s why I’m confused. Are the authors talking about Christian women who still believe the lies despite their faith? Or non-Christians who don’t know to turn to God for the truth?

I guess the former, because in the guided journal, they ask, “. . . is this fear there? The fear that you will end up abandoned and alone?” And then they say, “Take a moment and invite God in . . . to give you the courage to begin to trust him with your life in ever deeper ways.”

Which is a nice way to end the guided journal, but in reading the book first, I was left at the end of the chapter with just kind of . . . Um, okay.

I should also mention that even though there are things I both like and don't like about this book, that's ME.

I'm sure it would resonate differently with different women.

The only way to know is to read this book for yourself. It's easy to get the library to order it if you request them to.