January 13, 2014
If you ever go to Hawaii, you must visit Royal Kitchen and try their char siu manapua. It is a little golden bun so delicious that it will send you into a higher plane of consciousness.

Basically, it’s marinated pork baked inside a fluffy bread bun. It’s like those Chinese steamed bao buns you see in restaurants and sometimes at bakeries, but manapua is usually baked rather than steamed. You can get steamed manapua too, but I tend to like the baked ones.

You can get the manapua stuffed with char siu pork or other things. I’ve also eaten it with kalua pork, which is Hawaiian-style smoked braised pulled pork.

Captain Caffeine had frozen some pulled pork he made in his smoker a few months ago, so I pulled it out of the freezer to make manapuas on my own, using this recipe for the bun. I’m too lazy to knead, so I used my bread machine to make the dough. I just put all the ingredients in my bread machine, with the liquid ingredients first and then the flour and yeast on top, and put it through the dough cycle.

The recipe called for 6 cups of flour, which is a LOT for my bread machine, and it spilled over a little bit after rising. When I was making the manapuas, it seemed like an awful lot of dough per bun, but I just followed the recipe. It turns out, it was just right. I actually probably should have stuffed it with a little less pulled pork. 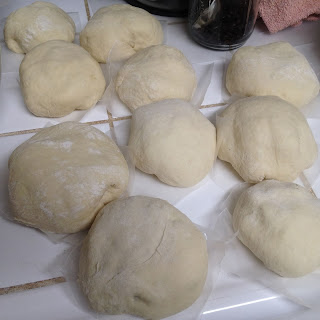 They baked up sooooo beautifully! I used my convection oven because I was making yogurt in my regular oven, so I baked them at 350 for 18 minutes each batch. 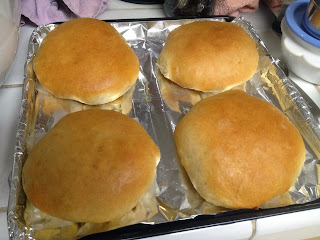 Very yum! I was a little full from dinner but I had to try one. I was only going to eat half but I couldn’t stop myself! 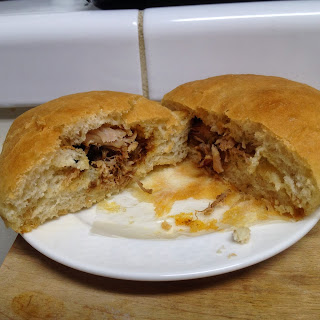 The bun isn’t as big and fluffy as Royal Kitchen but it might be because I stuffed it with a little too much pork. This recipe is definitely a keeper for us! What a great way to cook Captain Caffeine’s smoked pulled pork!

Any of you ever tried manapua or Chinese buns? If you like smoked pulled pork, give this recipe a try!