Winner and excerpt - THE SOLDIER’S SISTER by Debby Giusti 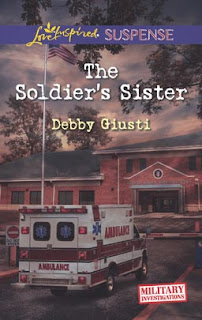 The winner of
The Soldier's Sister
by Debby Giusti
is
Sandy F.

I know the rest of you are crying into your chocolate and Oreo cookie ice cream that you didn’t win. Cheer up! Order the book!


WHO WILL PROTECT HER?
Someone wants Stephanie Upton dead. A warning to leave town is just the beginning. Fearing for her life, Stephanie turns to Special Agent Brody Goodman for help and protection. But can she trust him when he's convinced her own brother is a prime suspect? Torn between her devotion to two men—an estranged brother whose trust she yearns to regain and an agent she may be falling for—Stephanie doesn't know whom or what to believe. As feelings between her and Brody escalate, she'll have to choose sides to stay alive.
Military Investigations: Serving their country and solving crimes
Excerpt of chapter one:

This week, the featured book is: Riptide by Elizabeth Goddard (Love Inspired Suspense) (Camy here: This is a great book!)