Winner and excerpt - THE GENERAL’S SECRETARY by Debby Giusti 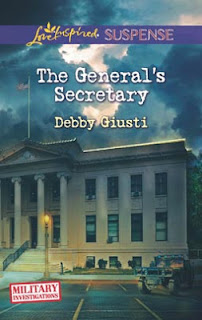 The winner of
The General’s Secretary
By Debby Giusti
is
Mara M.
Congratulations! (I've emailed you. Please email me at camy {at] camytang[dot}com if you didn’t get the email message.)

I know the rest of you are crying in your chocolate croissants that you didn’t win. Cheer up! Order the book!

Lillie Beaumont's dark past has just turned up on her porch—fatally wounded. The dying words of the man imprisoned for killing Lillie's mother suggest hidden secrets. Criminal Investigations Division special agent Dawson Timmons agrees. He has his own motive for seeking the truth, and it gives Lillie every reason to doubt him. But even as they reluctantly begin to face painful secrets together, Dawson fears that a murderer is waiting to strike again. And this time, Lillie is right in the line of fire.…

Each stand-along book in the series is available in print or e-book and can be found at Amazon.com: The Officer’s Secret, The Captain’s Mission, The Colonel’s Daughter, and The General’s Secretary. Watch for The Soldier’s Secret, to be released in September.