Excerpt - THE FINAL CRUMPET by Ron and Janet Benrey 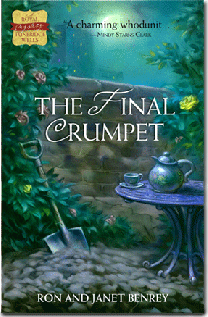 The Final Crumpet
by
Ron and Janet Benrey

No wonder the tea plants in the garden didn’t grow!

When Nigel Owen and Flick Adams—the new director and curator of The Royal Tunbridge Wells Tea Museum—dug up two stunted Assam bushes, the last thing they expected to find was the body of Britain’s most famous missing person. Etienne Makepeace, England’s renowned "Tea Sage," disappeared forty years ago without a trace. But there he lies, in the museum’s Tea Garden, buried in a shallow grave—and every policeman and reporter in the British Isles wants to know why.

So does the stodgy English bank that will fund the museum’s acquisition of a major collection of tea antiquities. They’re ready to pull the plug on the deal.

Nigel and Flick have no choice: to save their beloved museum, they must delve into the 1960s and discover what even the spymasters of Her Majesty’s Government don’t know—Etienne Makepeace brewed more trouble than tea during the Cold War.

In no time at all, Nigel and Flick are up to their teacups in ancient spies, modern femme fatales, and a mystery that threatens to turn deadly. . .unless they give up their quest to find the secret of Etienne Makepeace.

Buy from Christianbook.com
Buy from Amazon
Buy from Barnes and Noble
Buy from Books a Million