Along with reading, two of Lynn's lifelong passions are history and archaeology. While researching her Biblical fiction series, Chronicles of the Kings, these two interests led her to pursue graduate studies in Biblical Backgrounds and Archaeology through Southwestern Theological Seminary. She and her son traveled to Israel during the summer of 1989 to take part in an archaeological dig at the ancient city of Timnah. This experience contributed to the inspiration for her novel Wings of Refuge.

Lynn resigned from teaching to write full-time in 1992. Since then she has published twelve novels. Five of her historical novels, Hidden Places, Candle in the Darkness, Fire by Night, A Proper Pursuit, and Until We Reach Home have won Christy Awards in 2002, 2003, 2004, 2008, and 2009 for excellence in Christian Fiction. 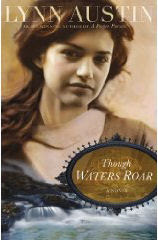 "Thank goodness you're such a plain child. You'll have to rely on your wits."

So went the words of Grandma Bebe. And for all of my growing-up years, I scoffed at the beauty of my sister and what I saw as her meaningless existence. But my wits hadn't served me well in this instance, for here I was, in jail. And while I could have seen it as carrying on the family tradition (for Grandma Bebe landed in jail for her support of Prohibition), the truth is, my reasons for being here would probably break her heart.

So how did I end up becoming a criminal? I've been pondering that question all night. Perhaps the best way to search for an answer is to start at the very beginning.

Harriet Sherwood has always adored her grandmother. But when Harriet decides to follow in her footsteps to fight for social justice, she certainly never expected her efforts to land her in jail. Nor did she expect her childhood enemy and notorious school bully, Tommy O'Reilly, to be the arresting officer.

Languishing in a jail cell, Harriet has plenty of time to sift through the memories of the three generations of women who have preceded her. As each story emerges, the strength of her family--and their deep faith in the God of justice and righteousness--brings Harriet to the discovery of her own goals and motives for pursuing them.