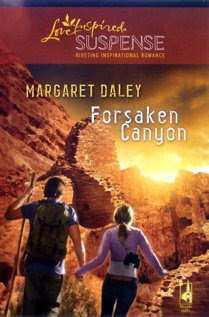 So threatens the tribal chief of police if Kit Sinclair dares enter Desolation Canyon alone. Hawke Lonechief insists it's too dangerous. He lost his wife to the treacherous canyon. He knows the ancient ruins Kit seeks aren't worth her life. But Kit is sure all that hiking and searching will help put her traumatic past behind her. When she risks Hawke's wrath by going alone, he finally agrees to lead her. On his terms. Impossible. Because someone else is following their every move. Watching them grow closer to danger with every step…

And now, here’s me and Margaret!

What prompted the storyline for Forsaken Canyon?

When I wrote Buried Secrets, Zach’s cousin jumped off the page and demanded his own book. So Forsaken Canyon was born. It is Hawke Lonechief’s story.

I love Hawke! Don’t hate me, but when I first read him as a minor character in Buried Secrets, I thought he was sexier than the hero. :)

What's your favorite scene in the book?

The scenes in the cave—I could feel the characters’ feelings and fear.

If your heroine were a dessert, what would she be and why?

A French chocolate silk pie because Kit was rich and luscious—with many dimensions to her personality.

If Forsaken Canyon were a movie, who would play your hero?

Duane Loken. Take a look at him at http://www.nativecelebs.com/duane.

Have you actually done all these adventurous things your characters do in the Heart of the Amazon series?

I wouldn’t be alive if I had, but I have been in several jungles, caves and the barren, harsh terrain of the Southwest. I’ve hiked in canyons and the mountains. I’m trudged through a hot, humid rain forest. But best of all I have a vivid imagination! I live through my characters.

What was your most daring vacation/recreation?

Rio de Janeiro where I couldn’t speak the language, nearly drowned in the Atlantic Ocean and swam in shark infested waters (I wondered why the man was in the crow’s nest with a rifle pointed at the ocean—didn’t ask about it until I’d swam back from the island).

Then there was the time I came up out of the tube in London into the middle of a riot that was about to explode into violence. Now that was scary.

Romantic suspense is so much fun to write and read. I hope you enjoy Hawke and Kit’s adventure in Forsaken Canyon.

Camy here: Thanks so much for being here, Margaret!