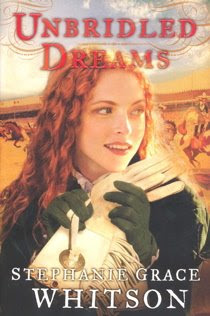 Irma Friedrich has everything a girl could want. . . but she's miserable. To her, the perfect life includes horses and roundups and trick riding.

Willa Friedrich, haunted by disappointment and fear, thinks controlling her daughter's future is the only way to protect Irma from dangers Willa knows all too well.

Shep Sterling, known as King of the Cowboys, leads a life that represents all Irma desires. . . and everything her mother fears.

Something has to give when Willa's insistence on sending Irma to finishing school collides with Irma's determination to audition for Buffalo Bill Cody's Wild West. And Shep Sterling is waiting in the wings.

This book hooked me from page one. It has moments of humor interspersed with lots of conflict and spiritual struggles.

I loved the picture of the time and setting, of the Wild West show and the social forces at work in Irma’s life.

The Wild West church struck a chord with me. It really reminded me of the River band’s ministry to the NASCAR crowds—ordinary people, saved by grace, making a place where the “prostitutes and tax collectors” would feel comfortable coming to.

People who show the love of God without the primness and structure of a formal church. People who preach the gospel unashamedly, but who can relate to the non-Christians who form the majority of the crowd.

The Wild West church was like that, and it inspired me to show the love of God that way—by just being me, letting God bring people into my life so I can love them as Jesus loved the “sinners.”

Irma is delightfully real—flawed, making mistakes, learning from them but also facing the consequences of them.

Willa was the woman I loved to hate in the beginning, but as her attitude changed and as her faith became more than just lip service, I liked her more. I never quite saw her backstory as excusing her behavior to her daughter, and the way she said “God wants this for Irma” when it was really “Willa wants this for Irma” was very grating, but she grew on me and at the end I positively liked her.

This was a fun, enthralling historical romance that I wouldn’t hesitate to give to a junior high girl or any other teen trying to understand her place in the world. It doesn’t excuse teenage rebellion against parents, and it also does encourage us to use the skills God gave us to bring Him (as opposed to us) glory.