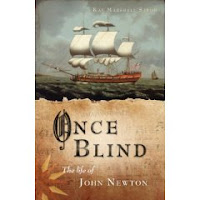 Every generation seems to have people who make a habit of embodying evil, John Newton observedpeople who have to look up in order to see the bottom. When they come to know God they are examples to others of Gods amazing grace. I, John Newton wrote, was one of these. This biography of the writer of Amazing Grace takes us on a journey worthy of a Hollywood extravaganza with swashbuckling adventures on the high seas coupled with the horrors of the slave trade. Once Blind retells Newtons conversion during a crushing storm no one expected to survive and then the most unusual years that followed as an evangelical clergyman with the Church of England during which he was known for his ability to bridge gaping theological chasms. In the end, John Newton risked his reputation, his wifes emotional wellbeing, even his cherished right to preachall so that he could bear witness to the horrors he had witnessed and had participated in, and to help bring about laws that would stop the slave trade. This is indeed a timely book as we mark the 200th anniversary of the laws that set in motion the end of 18th century slavery, for Gods grace is every bit as amazing today as it was in Newtons era. 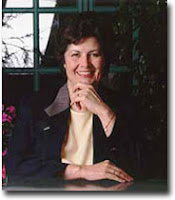 Kay Marshall Strom is the author of thirtyone published books. Her writing credits also include numerous magazine articles, short stories, curriculum, stories for children, two prizewinning screenplays, and booklets for writers. In addition to her writing, Kay is a soughtafter speaker at seminars, retreats, and special events throughout the U.S. and around the world. Kay and her husband have together spoken in more than twenty countries. They make their home in Santa Barbara, California.

Donned in a freshly powdered wig and crisp clerical robe, Reverend John Newton stood in the pulpit of London’s stately St. Mary Woolnoth Church. He looked old. Old and profoundly weary. Still, since precious few seafaring men survived to see the age of sixty-five, who could say whether it was his years that wore on him or just this day?

Wealthy tradesmen and upper-class businessmen, accompanied by their exquisitely dressed families, had arrived early, and with much fanfare, settled themselves in the forward pews—their pews. Further back, the “ordinary folk” squeezed in close together . . . shopkeepers and laborers and widows and such—the people the reverend held particularly close to his heart. Visitors packed in behind and between and around the regulars, and spilled out into the aisles and entryways. They came from all over London . . . indeed, from across England, and even as far away as Scotland. Every Sunday was the same when John Newton was in the pulpit.

Reverend Newton leaned forward, squinting to make out the individual faces of his flock. It was no use. The people he had grown to love so dearly appeared as little more than a collective blur. His eyes, always weak, had grown so dim he could barely read his sermon notes. Just as well, perhaps. This might not be the day to see faces clearly.

“You know me for what I am,” Reverend Newton began. “Not a person of mighty consequence . . . only a great sinner saved by God’s grace.”

Rustling in the pews. Eyebrows raised and glances exchanged. Whispers.

“Some of you are aware of the fact that a Slavery Abolition Bill has been sent to Parliament,” the reverend continued. “As I have intimate knowledge of the slave trade, my dear William Wilberforce has requested my testimony before a select parliamentary committee. I consider myself bound in conscience to answer this call . . . to wash my hands of the guilt which threatens to constitute a national sin, stained with crimson dye.”

The rustling stopped and whispers ceased. Silence fell over St. Mary’s. It was almost as if the cathedral itself was holding its breath.

With the slightest tremor of weariness, Reverend Newton continued: “Since I agreed to appear, I have received repeated threats from some who benefit most by the cursed trade. They say that if I insist on going through with my testimony, they will reveal to you, my dear parishioners and friends, the darkest evils of my own wretched past life. I will be publicly shamed and humiliated. Even forced from the ministry. They accuse me of being a hypocrite. Well, my friends, I can only say that I hope it will always be a subject of humiliating reflection to me that I was once an instrument in this awful business at which my heart now shudders.”

An uneasy shuffling among those in the forward pews.

“Every age seems to have people who have made a habit of evil, who have had to look up in order to see the bottom,” said Reverend Newton. “Yet in the day of God’s power, they are saved and transformed. They become an example to other believers, giving them an opportunity to praise God for his amazing grace. I, my good people, was one of these. God saved me so that people would look at me and say, ‘If God could save John Newton, he can save anyone.’ Surely you can understand, then, that my silence at such a time as this would be criminal . . . even though my words come too late to prevent or repair the misery and horror to which I was an accessory.”

Many of those crowded into the church that morning owed their livelihoods—indeed, some great fortunes—to the slave trade. Of this fact, John Newton was well aware. Besides, these people worshipped in a respected cathedral of the Church of England, not in a meetinghouse of Quakers or, even worse, of Dissenters. Not in the expected haunts of evangelical rabble-rousers.

“Those of you who have read my publication, Narrative, must think you know me well. But had I given details of the wickedness of my heart and life, it would have been too shocking for my readers to bear.”

As Reverend Newton’s passion grew, a new strength and authority overtook him. His weariness fell off like a worn-out cloak.