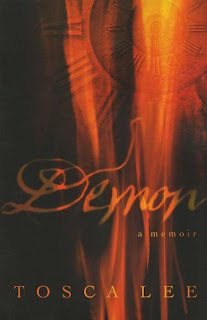 Today I have a fun interview with author Tosca Lee talking about her novel, Demon: a Memoir!

One night changes everything.

Recently divorced and mired in a meaningless existence, Clay drifts from his drab apartment to his equally lusterless job as an editor for a small Boston press--until the night Lucian finds him and speaks the simple words: "I'm going to tell you my story... and you're going to write it down and publish it."

What begins as a mystery soon spirals into chaotic obsession as Clay struggles to piece together Lucian's dark tale of love, ambition, and grace...only to discover that the demon's story has become his own.

And then only one thing matters: learning how the story ends. 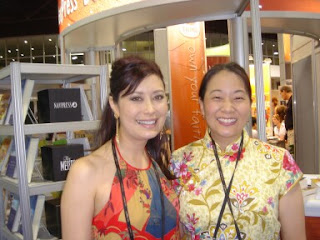 And now, here’s me and Tosca!

What inspired you to write Demon?

Through the 90s, I was into online, collaborative storytelling. By “into,” I mean totally addicted. My group and I loved writing up stories for new characters and playing them off one another. Actually, we were obsessed. Anyway, around 1999 I was trying to come up with a new story character—something different. An angel. No, an expatriate angel. What would that be like? Would she go around tempting people to smoke? To shoplift? To lie… to eat carbs?

I mean, definitely to eat carbs. But the other stuff… it seemed really petty. It didn’t fit with the wider and serious scope that I think beings in the spiritual realm really fill. So I started thinking about the world—and particularly humans—from a fallen angel point of view. And I realized that the demonic vendetta wasn’t about being petty, but about being vindicated.

Side note from Camy: There’s a really neat href="http://www.demonamemoir.com/story.html" target="_blank">Story Behind the Story page on Tosca’s website.

What's your favorite scene from Demon?

Well, in terms of imagery, which I’m really in to, it’s in chapter five when the fallen angel invades Clay’s dreams with the memory of Lucifer’s attempted ascension to heaven. It was a trip to imagine what this was like, to fix it with words, you know? This is what I love about writing.

But personally, I giggle every time I read the scene where Clay is on his way to Cabo. There’s a short, Asian man there with a receding hairline wearing gold-toe socks. That’s totally my Dad.

How neat you have a shar pei! I have a mutt named Snickers who's the biggest butthead on the planet, but just too darn cute to stay mad at. Any fun dog stories you want to share?

Attila the Flatulent Wonder is quite the adventure to live with. The story that comes to mind is from a few years ago, when Attila had a black cat, named Chicken (I always thought it’d be funny if I said “Chicken” when my husband called to ask what was for dinner). Turns out Attila was allergic to the cat, but we didn’t know that then. Anyway, I realized one day that Chicken really didn’t require a lot of litter-box cleaning. Which was fine with me but after a while it did sort of give me cause to wonder. Because you know, some things are just supposed to happen in that litter box. But it was basically clean, all the time. I couldn’t figure it out.

Then one day I saw little bits of cat litter sprinkled all over the hallway rug where Attila liked to take his special treats and eat them.

Lo and behold, he had been eating Kitty Crunchies.

ROFL!!!! Sounds like Snickers, she loves those things. Almond roca for dogs.

If you were a dessert, what would you be and why?

Do you prefer coffee or tea, and why?

I am trying to give up coffee. I was doing fine until just now. Thanks. Thanks a lot.

Oops. Sorry about that. (I sound at least a smidgen sorry, don’t I?)

I’m reading so many theological commentaries right now while working on Havah: The Story of Eve, that I haven’t had a chance to ingest in mind candy. I’m going to go crazy in a few more days and read a bodice-ripper or a stack of People Magazines or something because I won’t be able to take it any more.

I’ll send you some of my husband’s Star magazines. :)

The Kitty Crunchy thing was gross, wasn’t it.

Camy here: LOLOLOLOL! I liked it, but then again, I’m weird. Thanks for being here, Tosca!