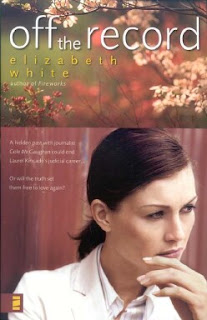 Today I have author Elizabeth White with me talking about her newest novel, Off the Record!

Judge Laurel Kincade has it all—brains, beauty, and an aristocratic Old South family to back her up. A political rising star, she’s ready to announce her candidacy for chief justice of the Alabama Supreme Court.

Journalist Cole McGaughan has ambitions too. Working as a religion writer for the New York Daily Journal, he longs to become a political reporter. Then his old friend Matt Hogan, a private investigator, calls with a tip. The lovely young judge may be hiding a secret that could derail her campaign. Would Cole like to be the one to break the story?

Cole sees a clear road to his goal, but there’s a problem. Laurel’s history is entangled with his own, and he must decide if the story that could make his career is worth the price he’d have to pay. Can Cole and Laurel find forgiveness and turn their hidden past into a hopeful future—and somehow keep it all off the record?

And now, here’s me and Beth!

What inspired the storyline for Off the Record?

Two years ago, I read an article in our local paper about Alabama judge Sue Bell Cobb, who had just announced her candidacy for the Alabama Supreme Court. To that point, no woman had ever been elected as chief justice. That got my imagination rolling. As it turned out, Judge Cobb was elected last fall and made history!

What's your favorite scene from Off the Record?

Varies from day to day. I love the Hardball scene at the end. No spoilers, but it's pretty hot!

Killer Banana Pudding. It's been rolling around my family for years (which is why my family pretty much rolls). Here's the recipe:

Mix pudding mix, milk, and Eagle brand with electric mixer until thick. Fold in vanilla, then Cool Whip. In enormous bowl, layer cookies, pudding mixture, and sliced bananas until ingredients are used up. Finish with pudding, then sprinkle reserved cookie crumbs on top. Yield: 1-24 servings, depending on how big a hog you're serving. Don't ask about nutritional content. Just enjoy.

What's your favorite Southern dish, and will you make it for me if I arrive unannounced on your doorstep?

Here it is. You can make it yourself!

Combine all ingredients in large bowl. Amounts can be adjusted to your individual taste. Experiment by gradually adding ingredients until you like it.

Do you have your ideal office? And if you don't, what would it be like?

I have a little room at the back of the house with some of my favorite artwork (a pen-and-ink of the Scarecrow of Oz done by my sister, a charcoal of "The Shepherd and Lamb", and various works by my children). I have a couple of plants I've managed to resuscitate multiple times, a folding cane-bottom rocking chair my dad made, and shelves full of BOOKS! I work on a big Mac table that's the perfect height, and I sit in a big padded chair I got on clearance at Sam's. If I just had some curtains it would be perfect.

Thanks for noticing me.

Camy here: Thanks for being here with me, Beth!