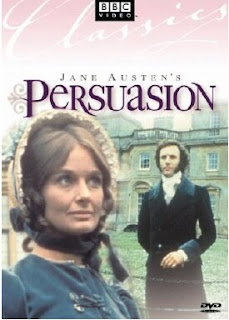 I’m rather pleased with the BBC version of Persuasion despite the fact it was done in 1971.

Costumes: score 3. The costumes were nicely designed, but the fabrics were very non-authentic, which I could tell even though I’m not a designer. The fabrics were a bit dated to the 70s, which I can’t blame them for, but I don’t think they should have used fabrics that wouldn’t have been available in the 1800s, like some rather polyester-looking dress fabrics and a few jackets. There were also some rather hideous bonnets and caps.

Acting: score 4. I loved the two main actors who played Anne and Frederick. Anne especially was well-done, although the actress made Anne a little more lively than I’d have expected. The secondary characters were a bit melodramatic, but not overly so. I was very disappointed in the accident at Lyme—it was not only poorly acted by the supporting cast, it lacked any drama or urgency. However, I liked the chemistry between Frederick and Anne, especially in the later scenes.

Camera/filming: score 4. The film quality for the outdoor shots was very poor, but I can’t really blame them because this was 1971. The indoor shots were well-laid out, I thought, even if it did remind me of American soap operas.

Musical score: score 3. The score and instrumentation weren’t bad, but they didn’t use it very much at all. I think they could have used music to more advantage.

Script: score 4. Some of the pacing was a bit slow, but on a whole, I think the scriptwriter did a good job including pertinent dialogue and helping the audience understand what was going on whether they read the book or not.