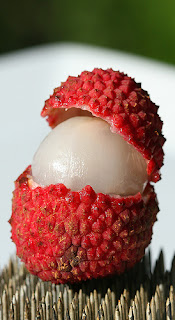 My mom gave me a packet of loose leaf flavored tea that I personally don’t care for, but one of you might. It’s lychee flavored tea.

If you’ve never tasted fresh lychee fruit, then you’re missing out. It’s sweet and juicy. I don’t know what to compare it to except maybe a sort of cherry. The texture is softer than a cherry, however, and the fruit is larger and white colored instead of red/orange.

My grandma has a wonderful lychee tree that gives tons of fruit, although it's a bit fickle--some years it'll flower, and other years it won't. Mom says it has to do with the weather and also how much my dad trims it. If he's ballistic with the branch cutter, we're in for a slim lychee season next year.

I love fresh lychee. It's juicy, almost like an orange. Well, juicy like a cherry. The seed can range from very large (my parents' tree) to very small (my grandma's tree).

You can peel off the rough outer shell and the inside is pearly white and juicy. It’s about the size of a walnut.

However, my parents also love the dried lychee, which I don’t like. Lychee tea tends to taste like dried lychee (I’ve tried it before, although I haven’t opened this package of tea).

Even though I don't like dried lychee, I know there are lots of people who LOVE dried lychee.

So, does any of you want this tea? If so, leave a comment to stick your name in the hat, and I’ll draw a winner next week Wednesday, April 25th. International readers are welcome to enter.

Update: Oops, I forgot to give this away on Wednesday. I'll give it away on Tuesday, May 1st.