Interview with Susan May Warren

Today I have the fabulous Susan May Warren, whose new novel, Reclaiming Nick, just released! 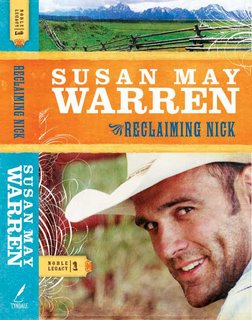 Nick Noble hadn’t planned on being the prodigal son . . .
But when his father dies and leaves half of Silver Buckle — the Noble family ranch — to Nick’s former best friend, he must return home to face those he left behind. And to make sure that the Silver Buckle stays in the Noble family.

Award-winning journalist Piper Sullivan believes Nick framed her brother for murder, and she’s determined to find justice. But following Nick to the Silver Buckle and posing as a ranch cook proves more challenging than she first anticipated. So does resisting his charming smile.

As Nick seeks to overturn his father’s will — and Piper digs for answers — family secrets surface that send Nick’s life into a tailspin. But there’s someone who wants to see the Silver Buckle leave Noble hands, and he’s willing to do whatever it takes to make that happen, even if it means taking a life. 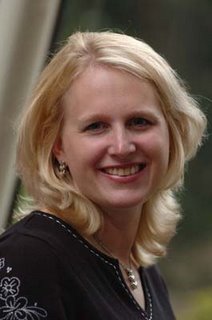 Tell us your favorite part about writing Reclaiming Nick.

I had the unique experience of visiting a ranch before I wrote this story and, never having been on a real ranch before, I chronicled my observations as a “newbie” in awe of the workings and landscape and the challenges of living on a ranch. I used theses observations as I wrote the character of Piper, who is surprised at how ranch life affects a city girl. At times as I was writing, I felt right back there, smelling the grass, walking among the cows. I also loved writing about a girl who couldn’t cook – brought me right back to my newlywed days when I burned nearly everything I put over the flame!!

Have you ever lived on a ranch? Tell us an embarrassing story about it.

I’ve never lived on a ranch. But even a city girl knows that you shouldn’t get near bulls. Well, unless you’ve raised them from a calf, like my hostess, Jan, did. “I want you to meet PeeWee,” she said to me, and I thought, “Oh, fun, a baby cow!” Uh, no. PeeWee is a 2000 pound bull that bellowed and drooled and had a glassy look of suspicion in his eyes as we got of out of the truck at the watering trough. “C’mere, PeeWee,” Jan yelled, and held out what she calls a “Cookie” – an alfalfa ball. PeeWee lifted his head and seeing his beloved “Mother,” he started trotting over. “He’ll eat from your hand,” she said and held out the treat. Yeah, right. I stared at her the treat in her hand, then at the bull. Then back to the treat.

Then I got into the truck and closed the door.

Which of all your books does your FAMILY like best?

I think their favorite will always be
Happily Ever After, the first novel I ever wrote. So much of my family’s personal history in our favorite vacation town is contained in that story of a woman who dreams of opening a bookstore, and the handyman who may or may not be her hero. From the dog – Rip – to Mona’s favorite treat – an elephant ear, are precious memories from my childhood. They also loved Everything’s Coming up Josey, however, because Josey contains so much of my voice, and finally they got to read my mind!

If you were a secret agent, what would your codename be?

The Shadow (This was conjured up by my son Peter, who says I always appear when he least expects it, he he!) and I like to sit back and observe, sorta blend into the surroundings and take notes. You never know what I might notice, and….use in a book!

If you were a Russian food, what would you be and why?

Borscht. Because I’m a mix of many different personalities and ingredients, taken separately don’t pack a punch, but seasoned together can be tasty. And I’d like to think my “taste” improves the longer you know me. *g*

Camy here: Thanks for joining us, Susan!