The Varleigh Medallion by Sylvia Thorpe

February 22, 2022
I just read this really delightful Regency romance and wanted to share about it, especially because it’s available to read for free online at Archive.org. Here’s the back cover blurb: 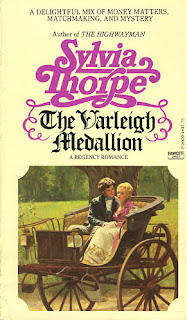 The Varleigh Medallion by Sylvia Thorpe

When little Theodore Mallory inherited Garth House from an aged and distant relative, it seemed to his eldest sister, Dione, the answer to many problems. Against all advice, she persuaded her widowed mother to remove the family from the luxurious London home where they were living on the charity of rich reltaions and to set up house at their newly acquired property in the country.

But Garth House was not quite what Dione had expected. And though she possessed a happy facility for making the best of things, she would have found it difficult without the encouragement and advice fo their neighbor, Sir Greydon Varleigh, with whom she struck up a prompt and satisfying friendship.

Sir Greydon, however, had problems of his own, not the least of which were a matchmaking grandmother and the missing Varleigh Medallion, a priceless heirloom.

What Sir Greydon wasn't prepared for was ... Dione.

Camy here: There’s something about these Regency romances written decades ago that’s really sweet and satisfying. This is a gently moving love story without a lot of conflict, but I really loved the characters and enjoyed watching them fall in love.

I especially loved the heroine, who reminded me very much of a capable, strong-minded Elizabeth Bennet. She’s sensible but loving toward her family, and she does her best with the difficult cards she’s been dealt with.

The hero was a little too perfect at first, but not in a bad way. It just emphasized that a romantic entanglement between the two was bound to have difficulties because of Dione’s genteel but lower social status. However, he was refreshingly forthright, which you don’t often seen in the more torrid historical romances written by authors in the 70s and 80s.

This book was printed several times. I originally bought the mass market paperback version published by Fawcett Crest in 1979. The book was also printed in a Doubleday Book Club hardcover edition along with two other novels, both contemporary (at least, contemporary for 1979).

The Doubleday Book Club edition is available to read for free on Archive.org by clicking here. You only need to create a free Archive.org account and then you can borrow it for an hour to read online, and your borrow is renewable every hour, assuming no one else wants to read it at that moment. You will have to skip past the first book, Escape to Happiness by Elisabeth Beresford, unless of course you want to read it.

This is not a Christian romance novel, but it is a sweet and clean romance. I hope you try it! Let me know what you thought about it!