Berserk of Gluttony by Isshiki Ichika 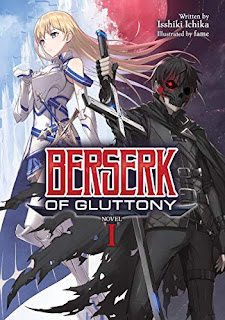 This is a fantasy light novel series that has become one of my current favorite series. Here’s the back cover description for book 1:

Fate Graphite is one of the forsaken. Cursed with the skill "Gluttony," he is ever starving, never sated...until the day he kills a dying thief and devours the man's strength--and his soul. The true hunger of Fate's Gluttony has awakened, and if he can learn to control his power, he will at last be the master of his own destiny.

I absolutely loved this from the moment I first read the sample because it showed a weak hero who does the right thing and as a consequence overcomes his obstacles. I loved how, although he was so weak and bullied, he made the decision to help the heroine despite the fact it was dangerous, and thus he was able to activate his secret skill and become super-strong (although not all at once).

He’s also fundamentally a really nice person—too often in these types of light novels, the hero is a dark anti-hero just swimming in vengeance and rage and selfishness. But here, Fate is actually a decent guy and a sympathetic character most of the time. He does devolve a bit into revenge against a man who bullied him, but he does it in order to uncover a terrible crime, and not just to satisfy his need for vengeance.

There’s a ton of conflict that keeps the story moving along swiftly, and I blazed through book 1 in a few hours. I think I even forgot to eat. I was so glad that books 2 and 3 were available at the time, because I burned through those, too.

By the time this blog posts, book 4 will have released and I can’t WAIT to read it. I usually like to read the book before when a new light novel volume comes out, but this time I think I’ll read all 3 in order to get caught up.

There’s also a neat mystery about his sword and the backstory behind that. The other characters are sympathetic and interesting, and I thoroughly enjoyed reading the books.

It reads like a Lit-RPG novel, but it doesn’t get bogged down with stats and ability listings like some other series. (*cough cough* spider *cough*)

If you’ve never read Lit-RPG, this would be a good one to start with. Ultimately, it’s a fantasy novel, so if you enjoy fantasy, this will hit that button. (It does have some swear words, and it can be quite violent in some scenes, just FYI.) I loved this series so much!