The Saint's Magic Power is Omnipotent by Yuka Tachibana 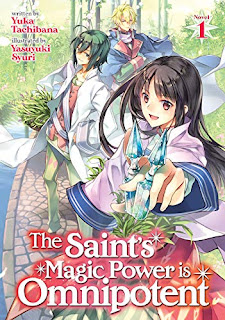 This is a light novel fantasy romance series that I absolutely LOVE and I wish it would come out with volumes sooner!

This is Not the Saint You're Looking For

Could workaholic office lady Sei be a legendary Saint? Not according to the crown prince of another world who summoned her and quickly declared a different girl was the real Saint! That suits Sei just fine--she would much rather spend her days quietly helping people with her unbelievably powerful magic. But how long can Sei live her ideal life of leisure before her true nature is revealed?

Camy: When I first picked this book up, it was because of a recommendation on Kobo, and I’m SO glad I did! I read the sample and was completely hooked. I bought the first book and absolutely devoured it. I then bought books 2 and 3 the same day I finished book 1.

I really love how the heroine is extremely pragmatic. She’s a working women (in Japan they call them “office ladies” or OL) who’s been completely overworked, so she’s not your typical teenage heroine from most light novel series. Instead, she’s a bit older, in her mid-twenties, and she has experience working for a company. She’s also extremely contentious about doing her work to the best of her ability, which is what got her overworked in the first place.

As a result of her experience at work, dealing with coworkers and managers, and because of her conscientious personality, she keeps her cool when suddenly dumped into a shocking situation. She also doesn’t hesitate to speak her mind and get upset at poor treatment. I guess I just really love that she doesn’t take crap from anybody and she stands up for herself. She’s not some shrinking, timid personality, but she’s also not brash or reckless. She’s methodical and logical, which makes her ideal for her new job of making potions and working in pharmacology in her new world.

She’s not a a physical fighter, and monsters and dangerous situations scare her like any normal person, but she eventually gathers her wits about her and actively looks for ways to help. It’s what causes her to save the life of the hero, a knight captain.

I really love that both characters are a little older and more mature. There isn’t quite as much of the typical frustrating miscommunication you see from teenaged protagonists in light novels. At the same time, the heroine is woefully lacking in relationship experience so she’s a bit clueless as to the hero’s feelings. I found that rather funny and often very romantic, too.

Subsequent volumes only seemed to get better, and I’m eagerly awaiting volume 4, which will release in a few days!