The Apothecary Diaries by Natsu Hyuuga

October 05, 2021
I had a lot of health issues for almost all of August and about half of September, and I’m still struggling with IBS. The only thing I could do to get my mind off the pain and nausea was to read, so I ended up reading a bunch of books on my TBR pile. I read a lot of really excellent books and thought I’d blog about them (since I wasn’t getting any work done while I was sick). Today I’m blogging about The Apothecary Diaries: Volume 1 (Light Novel), the first book in a light novel series.

I actually read the first book in this series a while ago, but the 3rd volume just came out and I pretty much devoured it. This has become one of my favorite series lately.

Here’s the back cover description for book 1: 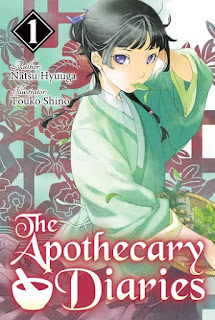 In the East is a land ruled by an emperor, whose consorts and serving women live in a sprawling complex known as the hougong, the rear palace. Maomao, an unassuming girl raised in an unassuming town by her apothecary father, never imagined the rear palace would have anything to do with her—until she was kidnapped and sold into service there.

Though she looks ordinary, Maomao has a quick wit, a sharp mind, and an extensive knowledge of medicine. That’s her secret, until she encounters a resident of the palace at least as perceptive as she is: the head eunuch, Jinshi. He sees through Maomao’s façade and makes her a lady-in-waiting to none other than the Emperor’s favorite consort… so she can taste the lady’s food for poison!

At her lady’s side, Maomao starts to learn about everything that goes on in the rear palace—not all of it seemly. Can she ever lead a quiet life, or will her powers of deduction and insatiable curiosity bring her ever more adventures, and ever more dangers?

As you can see, it’s nothing like a Lisa See novel. (I have nothing against Lisa See and have read some of her books, but I tend to prefer books with a bit more humor.)

The writing for The Apothecary Diaries is incredibly compelling (at least, it was for me) and once I started, I couldn’t put it down. The main story is a series of small mysteries, but they all are connected in unexpected ways at the end of each volume.

This is not like a typical American Romance novel in that the relationship between Maomao and Jinshi is unresolved at the end of the book. The romance is actually a bit of a slow burn, and doesn’t look like it’ll resolve any time soon, but the book is rather romantic despite all that.

I love the fact that Maomao is so pragmatic a character. She’s had a very unusual upbringing amongst beautiful courtesans in the red light district, and has been heavily influenced by a rather mercenary madam who has helped raise her. As a result, she’s very no-nonsense, and I love how she's not swayed by the beautiful eunuch, Jinshi, who pretty much always gets his way because of his looks. There are also mysteries about both their backgrounds which are very intriguing.

What really gets me is the humor. It’s not slapstick humor—instead, it’s the sarcasm that has me rolling. There are some wonderful lines that made me snort.

(FYI, Maomao grew up with prostitutes so there is euphemistic mention of sexual things but nothing crass or graphic, and there are a few swear words.)

If you’re looking for something a little unusual with gems of sarcastic humor, I highly recommend this series.