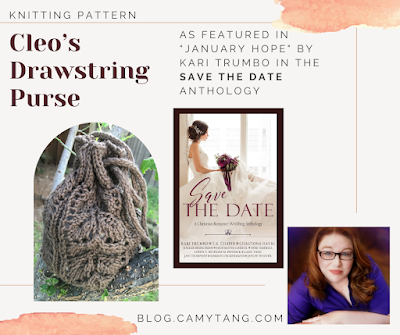 Kari Trumbo is one of the twelve authors participating with me in the Christian Contemporary Romance anthology, Save the Date, which releases September 15. Kari’s novella in the anthology is titled January Hope.

In celebration, I wrote a knitting pattern for the lace drawstring purse used by Kari’s heroine, Cleo!

(In case you missed it, here are the links for my interview with Kari part 1 and part 2. Tomorrow I’ll post an excerpt of one of Kari’s other books, Better Than First.) 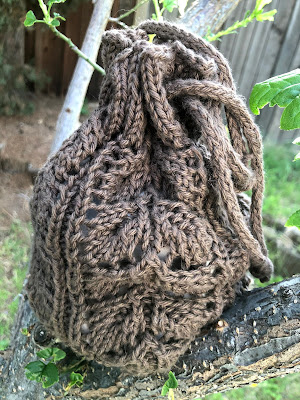 This is a pretty and practical little bag used by the heroine Cleo in Kari Trumbo’s novella, January Hope. Knit in a cotton/linen blend yarn, it’s just large enough for a cell phone and a small wallet. In the book, Cleo’s bag was a coral shade, but the bag I knit here is a chocolate brown color.

The lace pattern is the Double Rose Leaf stitch pattern originally published on page 195 in The Lady's Assistant, volume 2 by Mrs. Jane Gaugain, published in 1847. (You can download a scanned .pdf of the book from Archive.org.) I altered the stitch pattern slightly for ease of working in the round.

I knit the bag with a circular base, but if you’d rather have a square base, I have included instructions below. However, it may increase the amount of yarn needed for the bag.

NOTE: I designed this pattern specifically to use only one skein of CotLin. However, to be certain you have enough yarn, my suggestion would be to knit the ties first, then knit the bag. If you run out of yarn before binding off the top edge, then either reduce the number of stockinette stitch rounds before bind off, or start the eyelet round right after round 2, 4, or 6 of the fifth repeat of the Double Rose Leaf pattern. Alternately, you could knit the bag and if you don’t have enough yarn for the ties, substitute silk cords or wide ribbons for the knitted i-cord ties, or you could try making crochet chain ties instead. 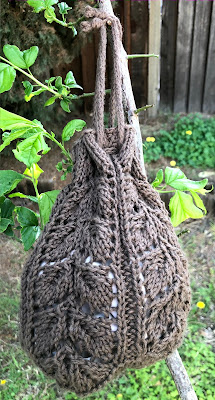 Gauge:
5.25 stitches and 8 rows per inch in stockinette stitch using US 5 needles. 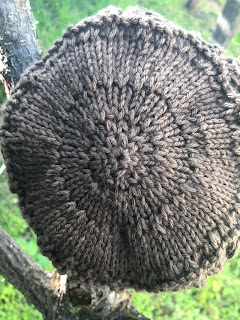 If preferred, here is an alternate Square Base you can knit instead of the Circular Base:
Cast on 24 stitches.
Knit garter stitch for 48 rows (or 24 ridges).
Pick up and knit a total of 95 sts around the square (about 24 sts each side, minus one stitch).

Set up rounds:
Purl one round
Next round: slip 1, knit rest of round. 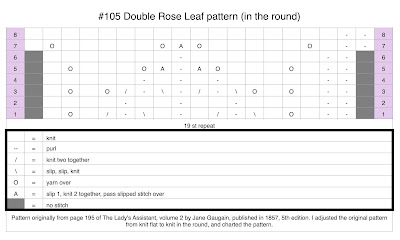 Knit the Double Rose Leaf pattern a total of 5 times, ending after round 8. 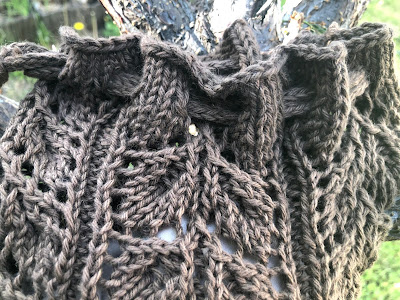 Bind off with US 7 or 8 needles (I used H size crochet hook). 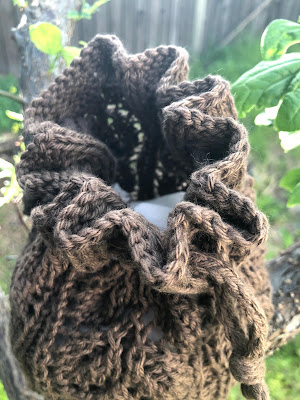 Make two ties:
Using US 4 (3.5 mm) needles, cast on 3 stitches with a provisional cast on using waste yarn. Knit a 3-stitch I-cord for about 16” (longer or shorter as you prefer; since the bag circumference is 16”, if you want the bag to open fully after tying the edges, knit i-cord for 18”). Then cut yarn and pull through the live stitches.

Undo waste yarn in provisional cast on and pull yarn through live stitches. Weave in ends.

Thread I-cord through eyelets, running in opposite directions so their ends come out on opposite sides of the bag. Tie ends into a knot. 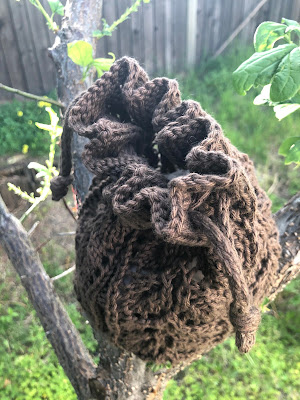 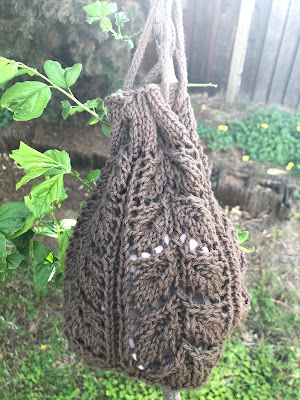 Get 12 novellas in Save the Date, a Christian Contemporary Romance anthology. Preorder now for only 99 cents! Releases September 15th. 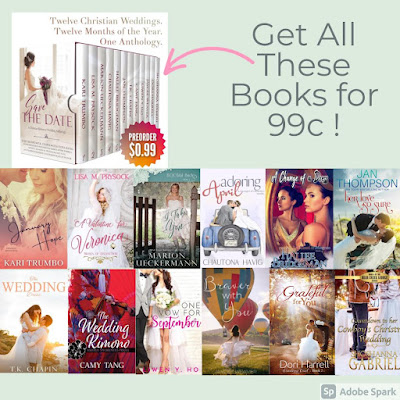