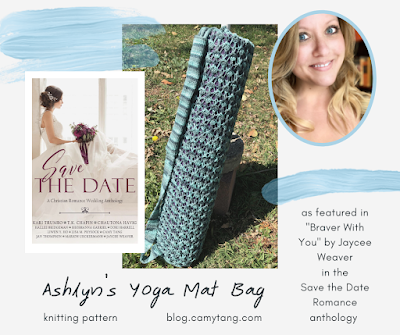 Jaycee Weaver is one of the twelve authors participating with me in the Christian Contemporary Romance anthology, Save the Date, which releases September 15. Jaycee’s novella in the anthology is titled Braver With You.

Update 2022: The Save the Date anthology is now out of print, but Jaycee’s novella is available individually on Kindle!

In celebration, I wrote a knitting pattern for the yoga mat bag used by Jaycee’s heroine, Ashlyn!

(In case you missed it, here are the links for my interview with Jaycee part 1 and part 2, and an excerpt of one of Jaycee’s other books, Whatever Comes Our Way.)

This yoga mat bag for Jaycee Weaver’s heroine, Ashlyn, is both pretty and practical. I made the base of the bag a little large, so that it will fit a variety of lengths of mat, and my husband (who does yoga every week) says that a larger base helps protect his mat a little better when he has to walk or bike with it to his yoga class. My husband’s mat was extra-thick so it was a slightly snugger fit than my own (cheap) thin yoga mat. In the photos, it is his mat inside the bag.

The strap is knit with the drawstring so that the weight, when carried, is distributed around the entire top of the bag rather than just from a small section where the strap would otherwise be attached.

I also made the drawstring long so that the bag top could be opened as widely as possible, and there is a shoulder pad that doubles as a cinch to tighten the top of the bag closed. 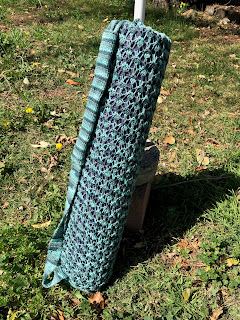 The lace pattern is a variation on spider net. It is called #70, Very Pretty, Something Like Spider Net, which I found on pages 162-163 in The Lady’s Assistant, volume 2, 5th edition, by Mrs. Jane Gaugain, published in 1857. I altered some of the stitches a bit to give some directionality to the decreases. 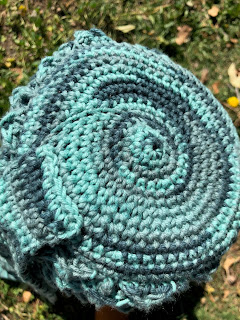 I crocheted the base so it would be a little heavier and sturdier, but below these are instructions for knitting the base instead if you prefer. 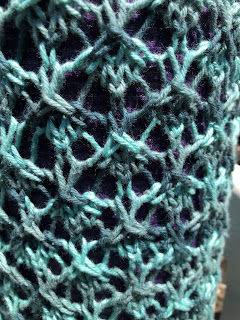 Start lace pattern and repeat the 6 rounds of the pattern 21 times or until the bag is about 24” from the base or the length that you want. Remember that it will stretch with a heavy mat inside.
Knit 4 rounds.
Eyelet round: (k1, YO, k2tog, k1) 18 times around.
Knit 4 rounds.
Bind off loosely. 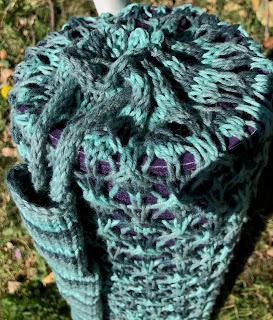 Strap:
Cast on 4 stitches provisional cast on with waste yarn.
Knit i-cord for about 26”, then string it through the eyelets at the top of the bag. Check that the bag can open all the way and that the I-cord isn’t too short.
Knit the 4 live stitches, then undo the waste yarn and knit the 4 cast on stitches.
Continue knitting the 8 stitches of the strap. You can knit moss stitch, garter stitch, or you can crochet the strap. I opted for single crochet so that the strap would be smooth and sturdy, and wouldn’t stretch quite as much as a knitted strap will when the yoga mat is in the bag.
Work until the strap, including the looped I-cord, is 28” long or the length you desire. (I opted for a shorter strap because my husband mentioned that it’s easier to carry the bag if the strap is shorter.)
Firmly sew base of strap to bottom of bag. 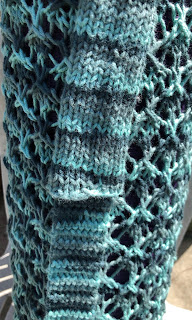 Weave in all ends.

The Save the Date anthology is now out of print, but Jaycee’s novella, Braver with You, is available individually on Kindle! 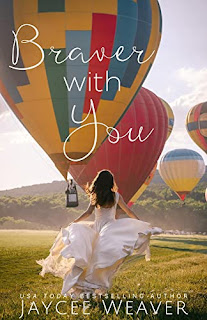