I don’t always post excerpts from my manuscript, but I happened to come across this snippet from Lady Wynwood’s Spies 1: Archer, it made me laugh. I don’t really remember writing it, but now I’m glad I did. :) 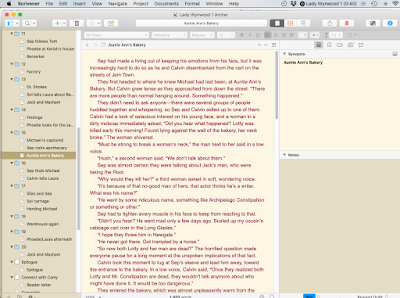 Sep had made a living out of keeping his emotions from his face, but it was increasingly hard to do so as he and Calvin disembarked from the cart on the streets of Jem Town.

They first headed to where he knew Michael had last been, at Auntie Ann’s Bakery. But Calvin grew tense as they approached from down the street. “There are more people than normal hanging around. Something happened.”

They didn’t need to ask anyone—there were several groups of people huddled together and whispering, so Sep and Calvin sidled up to one of them. Calvin had a look of salacious interest on his young face, and a woman in a dirty mobcap immediately asked, “Did you hear what happened? Lotty was killed early this morning! Found lying against the wall of the bakery, her neck broke.” The woman shivered.

“Must be strong to break a woman’s neck,” the man next to her said in a low voice.

Sep was almost certain they were talking about Jack’s men, who were taking the Root.

“Why would they kill her?” a third woman asked in soft, wondering voice.

“It’s because of that no-good man of hers, that actor thinks he’s a writer. What was his name?”

“He went by some ridiculous name, something like Archipelago Constipation or something or other.”

Sep had to tighten every muscle in his face to keep from reacting to that.

“Didn’t you hear? He went mad only a few days ago. Busted up my cousin’s cabbage cart over in the Long Glades.”

“I hope they threw him in Newgate.”

“He never got there. Got trampled by a horse.”

“So now both Lotty and her man are dead?” The horrified question made everyone pause for a long moment at the unspoken implications of that fact.

Calvin took this moment to tug at Sep’s sleeve and lead him away, toward the entrance to the bakery. In a low voice, Calvin said, “Once they realized both Lotty and Mr. Constipation are dead, they wouldn’t talk anymore about who might have done it. It would be too dangerous.”