God's plans and my plans

August 06, 2020
I’ve been studying the book of Acts lately, using Search the Scriptures: A Three-Year Daily Devotional Guide to the Whole Bible for my daily quiet time. I like Search the Scriptures because each day’s passage is usually pretty short and manageable, and there are only 2-3 questions to answer, so it doesn’t take a huge amount of time. The questions and sometimes the additional reference verses are usually targeted really well for study and application, so I get a lot out of it.

I’m almost at the end of Acts, and Paul has finally gotten to Rome. He’d been talking about it before he even went to Jerusalem for the last time, and God had even appeared in a vision and spoken to him to tell him that he would testify about Christ in Rome.

Search the Scriptures also gave some good reference verses from Paul’s letter to the Romans, and for the first time I was able to match the letter to the time Paul wrote it. What was curious was that Paul originally intended simply to stop in Rome on his way to Spain. He was probably excited to be able to take the gospel to uncharted territories and people who had not heard about Jesus.

But instead, he was arrested in Jerusalem and he appealed to Caesar to ensure he would not be handed over to the Jews who wanted to kill him. And so he was sent to Rome as a captive, and he would spend several years there.

God had definitely confirmed to Paul that He wanted him to go to Rome, and Paul was planning on going to Rome as soon as he could, but the way he got there was outside of what he had expected. He probably spent longer in Rome than he would have if he had been on a missionary journey, because he probably would have wanted to continue on to Spain and other people to preach the gospel to. Also, in Rome as a captive, he was exposed to non-Christians he might not otherwise have met, such as his guards and officials in the Roman government.

This story reminded me that God always has a greater plan than what we plan to do. Lately, my Bible study keeps coming back to this theme, which reminds me of this verse: 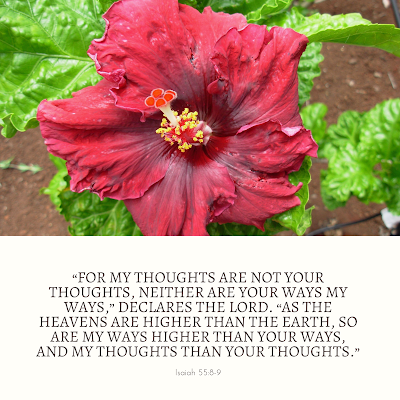 I’ve posted this on my blog before, but because God seems to be drilling this theme into me, I thought it would be good to post this again. (BTW the hibiscus is called Molokai Red, and it’s from my Dad’s garden.)

Basically, I realized that I can plan my books and my marketing, but I also must be willing to roll with however God arranges things. This was very appropriate for today, because I was reviewing my sales funnels and marketing strategies and then I did my quiet time, and this theme came up.

I think it’s okay for me to make plans for my marketing, and to set goals I can try to hit, but I also need to have a more flexible mindset, too. I tend to be too rigid in my thinking because I’m a control-freak, but God might have His own ideas about what He wants me to do.

If this is you, too, then let’s both pray that we can keep our focus on God and not ourselves, so He can use us the way He wants to!

Also, I want to pray for you! Leave me a prayer request using this Google form. (I promise to respect your privacy and you will not be added to any of my newsletters. If you want to sign up for my newsletter, click this link.)