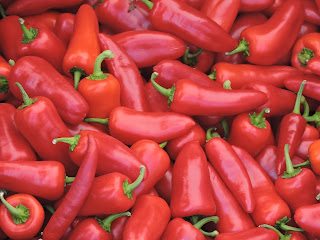 I had a really bad allergy attack yesterday (so did Captain Caffeine) and so I did some internet searching and found this article on cayenne pepper tea to clear sinuses from allergies or colds.

However, being a wimp about pepper and also knowing that my stomach is rather sensitive to it, I knew I couldn’t take a tea like that straight even with food, so I came up with this recipe to disguise the pepper in Chai Tea, soften it with milk, and adding extra honey. Also adding the cayenne in twice the amount of hot water (from the original recipe in the article) helped make it less painful.

The article also warns about this, but drink this tea with food. I ate some Snyder’s pretzels in between sips and that helped to keep my stomach from getting upset by the pepper. What also helped was drinking some baking soda in a glass of water. If you have problems with acid reflux, I wouldn’t suggest you try this recipe.

Also my lips were burning pretty badly from the pepper, but my throat and tongue weren’t too painful. Warning: the pepper sinks to the bottom, so either keep stirring/swirling as you drink it and/or don’t drink the last 1/4 cup.

It took at least a cup of the tea, but about 10-15 minutes after drinking it, my nose ran like a marathoner and my sinuses cleared. However, I had to drink the tea again in a few hours when they stuffed up again (darn allergies!). I’ve been looking for a way to naturally clear my sinuses when I have a sinus headache ( as opposed to taking Sudafed), so the next time I have a headache, I’ll be trying this tea.

As for the specific tea I used, I like Adagio’s Masala Chai tea because I like the flavor of the tea blend the best out of the types I tried. However, as Captain Caffeine likes to point out, I am a bit of a tea snob and have higher standards for how my tea should taste, so a cheaper Chai tea would work fine.

About Adagio: I drink a lot of Chai tea normally because I enjoy it, so I buy it from Adagio in bulk and it’s relatively inexpensive. I also like Adagio’s Jasmine tea, Genmaicha, Berry Blues (non-caffeinated), Mango Melange (non-caffeinated), and Matcha. If you’ve never tried Adagio Teas and you’d like a free $5 gift certificate, send me an email through my website (www.camytang.com) and I can have Adagio email it to you. (Make sure your email address is spelled correctly.)

Steep the tea in about 400 mL (less than 2 cups) boiling water for 5 minutes. Remove the tea/teabags and add honey to taste (I added closer to 2 tablespoons of honey). Add cayenne pepper and stir. Add milk.