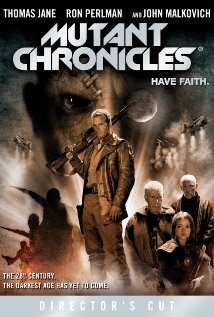 Since I'm writing a near-future/sort-of-dystopian story, I watched this movie (thanks to Netflix DVD). It wasn't quite as bad as I expected it to be, but it had its problems.

Here’s the blurb from Netflix:

In a futuristic world where Earth is divided into four warring "Corporations," a frightening new breed of NecroMutant threatens to destroy the global population unless the leader of an old monastic order can destroy the beasts and save the planet.

Camy: The story premise is that after the ice age, an alien machine came to earth to create those NecroMutants from human beings it captured, although the story never explains why that was the machine’s mission. Mankind warred against the machine up until an alternate reality Middle Ages, which was when the machine was buried.

The movie is set in an alternate reality future (the year 2707). The thought of four corporations ruing the world was credible to me since history had been changed after the machine touched down.

The main actor, Thomas Jane, did a decent job, and for me, there’s something about Ron Perlman—any thing he’s in, I just love his acting. John Malkovich had all of five minutes’ screen time, but even then he was so believable. This time I could notice the little things he does to make the character unique and above cliche. It was nice to see Sean Pertwee from Gotham in a minor role in this movie.

It was quite violent and there are F-bombs galore, which sometimes get mangled by the actors’ accents. The makeup special effects were very good, on par with The Walking Dead, and almost as gruesome.

My biggest beef with the movie is the characterization. One of the female main/minor characters, Severian, is really Too Stupid To Live. She’s supposed to be a bad@$$ swordswoman but she does dumb stuff that make her completely unsympathetic. I won’t go into spoilers, but she would have dived headfirst into the KoolAid, which does not make me care about what happens to her.

I was also scratching my head a bit at the ending.

Overall, probably a 3 out of 5 star movie for me. I mean, I watched to the end so it didn’t have buckets of suckage, but the writer side of me was thinking of ways the characterization could have been improved and holes in the storyline patched up.