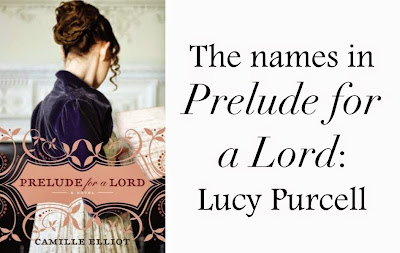 Actually … there’s no special meaning for Lucy’s surname. It sounded like a last name for a country woman seduced by Alethea’s father, and it wasn’t the name of any real-life peers.

Alethea’s father, the 7th Earl of Trittonstone, had an affair with a local woman, Hannah Purcell, a seamstress, just before he married Alethea’s mother. Hannah had Alethea’s half-sister, Lucy, only a few months before Alethea was born. Most of the village tried to shun Hannah, but she was the finest seamstress in the county, and the less affluent women grudgingly went to her. When Lucy’s mother eventually married a sailor, John Dawson (who died in the war), her reputation and her daughter’s was restored somewhat.

Lucy is close to Alethea, mostly because as a child, Alethea pursued the relationship once she realized who Lucy was. Alethea doesn’t like people telling her what not to do, so she deliberately befriended her illegitimate half-sister, Lucy, when the local women tried to hint her away from the connection because of Lucy’s birth. They share the same father, and so Alethea and Lucy look remarkably alike.

A couple years before Prelude for a Lord opens, Lucy had gone to Bath to seek employment as a maid, and by the time Alethea moves to Bath, Lucy has risen to the position of an abigail, a lady’s maid. She is currently employed by Mrs. Ramsland, who is a snippy, spiteful employer.

And I will also confess that I got Mrs. Ramsland’s name off of the spine of a book in my office. It wasn’t the name of a real-life peer, so I just ran with it.