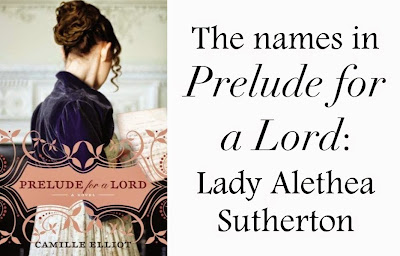 The name “Alethea” means truth, which I deliberately did in contrast to Bayard’s “blindness” (see my previous post to understand what was up with that). But ironically, Alethea herself is blinded to the fact that she is not alone, that God is with her.

As with Bayard, I again looked up the name Alethea in British census records to make sure there were women named Alethea during my book’s time period in the early 1800s.

I admit, I stole Alethea’s surname, Sutherton, from Mansfield Park by Jane Austen (I had to have something of Jane’s in there somewhere). Since I didn’t want to be rude and name Alethea after a real-life peer (especially since her father and brother were such nasty fellows) I checked with the Surname index of the Peerage of Britain and tweaked Jane’s “Sotherton” (who might have been a knight, the name is spelled both Sotherton and Southerton) to Sutherton. Since Alethea’s father was an earl, she is Lady Alethea Sutherton.

Alethea’s cousin, Wilfred, has inherited the title and is now the Earl of Trittonstone, and his wife, Mona, is as greedy a puss as you’ll ever see. Mona married Wilfred even though at the time he was third in line for the title because she hoped his exalted relations would help propel her to more elite social circles. I chose the title Trittonstone mostly because of Mona—“tritten” means “step” and stone is, well, stone. Wilfred was supposed to be Mona’s stepping stone to greater things.

However, Wilfred’s uncle and cousin were both profligates and did not move in the social circles that Mona was hoping for. However, when Wilfred’s uncle and then his cousin died and Wilfred got the title, Mona was ecstatic at her good fortune. It made her rather beastly to Alethea.