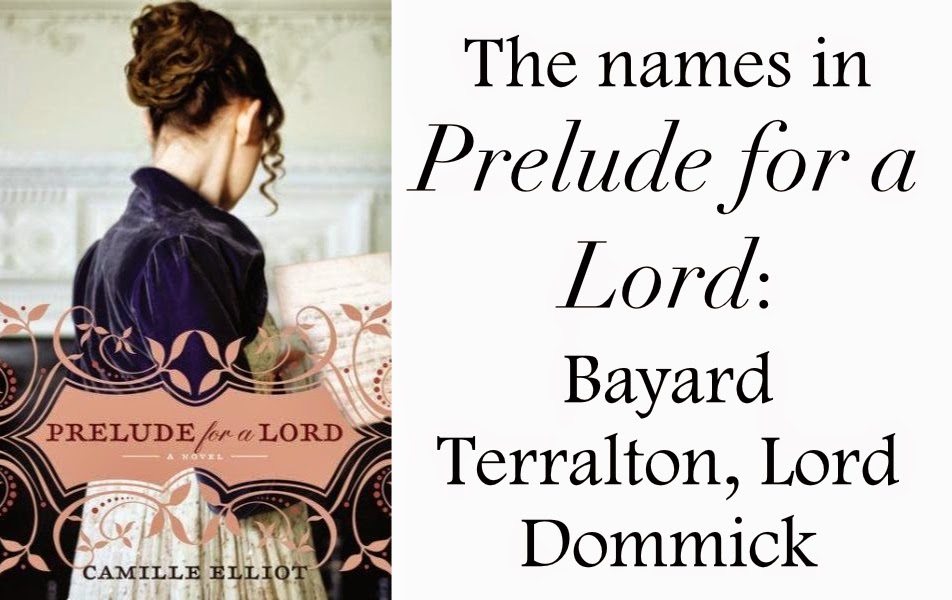 Recently a reader commented on my hero’s name, Bayard Dommick, and it occurred to me that people might be interested in how I picked the names of my characters in Prelude for a Lord, especially since many of you know how absolutely abominable I am at choosing character names.

I am proud to say that while it was difficult to come up with character names in this book, each name has a sort of meaning behind them, a “story behind the name.”

One thing I absolutely did not want to do was name any characters after real-life nobility, especially if the peer was still alive. I think it would be a little rude to do that since these families are very proud of their family names and titles. So I had to check all my surnames and titles against a Surname index of the Peerage of Britain. I managed to miff the spelling of some names so they wouldn’t match real-life people.

I had already settled on the name of Bayard’s title, Lord Dommick. It was one of those things that just seemed to fit him, and the meaning of the name “Dominic” is “belonging to God,” which I thought was appropriate for his spiritual arc in the story.

I looked at my hero’s personality. Bayard was a recluse archetype, a bit like Lord Byron or the Greek god Hades. So I looked up the meaning of Hades’ name and found that it can mean “sightless.”

I looked up the origin of the name and found that “Bayard” can mean a blind person. It was also used to describe men of courage and integrity. I also looked at British census records for the 1800s and found that Bayard was used as a first name during my book’s time period.

For the family surname, in the meaning of the name, “Bayard,” there was mention of Pierre du Terrail, seigneur de Bayard (1473-1524), a French knight. So I took “Terrail” and came up with Terralton.

Next, I’ll talk about my heroine’s name.