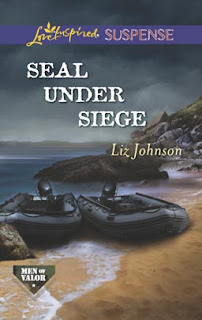 SEAL Under Siege
by Liz Johnson


SHE'S NOT SAFE YET
When Staci Hayes is rescued from a Mideast prison by navy SEAL Tristan Sawyer, she thinks the ordeal is over. But back in San Diego, a new threat arises. Staci has information that could prevent a hit on U.S. soil, and the terrorist will stop at nothing to silence her. Tristan insists on being her bodyguard, but his constant presence makes her long for things beyond her reach. Protecting Staci is the second chance Tristan needs to put the past behind him. Yet with a spy on the naval base, anyone could be a threat. Can he offer her safety…and love?
Men of Valor: These navy SEALS were born to excel….
Excerpt of chapter one:

This week, the featured book is: A Love to Treasure by Irene Brand (Heartsong Presents)