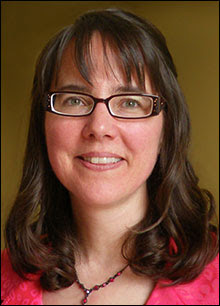 Sandra Orchard writes inspirational romantic suspense set in the heart of the Niagara region, Canada, where she lives with her husband of more than twenty-four years, two college-aged children and a husky pup with a fetish for rubber boots and remote controls. A former home educator, she received word of her first contract on her youngest daughter's first day of college. Sandra has an Honors Arts & Science degree with a major in math, and she attributes her delight in devising plots that keep her readers guessing to her affinity with mathematical problems.

The 2009 winner of the Daphne du Maurier Award for Excellence in unpublished Mystery/Suspense, Sandra was delighted to see her first novel, Deep Cover, released in September 2011 with Love Inspired Suspense. She's since contracted two more novels in her series Undercover Cops: Fighting for justice puts their lives—and hearts—on the line. Shades of Truth will be released in March 2012 and a third book will be released in the last quarter of 2012.

Sandra has always loved trying new things. Over the years, she's dabbled in a variety of arts and crafts. She's taken on a variety of construction projects from building a run-in for her daughter's horse to re-siding their first house, renovating bathrooms and installing trim and flooring. However, a back injury sidelined many of those hobbies, so now, when not writing, she enjoys hanging out with family—especially her new grandbaby—brainstorming new stories with fellow writers, and hiking or kayaking in God's beautiful creation. She loves to connect with her readers and can be found online at her website. 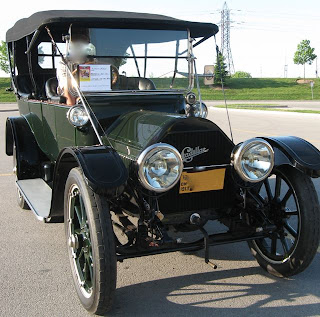 From the moment I saw this 1913 Cadillac convertible pull into our church parking lot, I knew I wanted to use it in a book. So I decided the heroine of Fatal Inheritance, Becki Graw, should inherit, along with her grandparents’ old farmhouse.

Of course, to write authentically about how riding in one feels, I had to ask the owners for a ride! 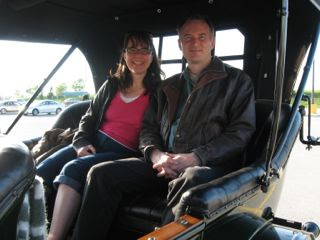 And since I write romantic suspense, my sweetheart needed to join me.

But let’s not forget the suspense! I grilled the owners on how my diabolical villain might sabotage their horseless carriage. I’ve got to tell you, it’s scary how easy it would be, if he were actually to do it, which, of course, I can’t tell you.