Guest blog and excerpt - TIES THAT BIND by C.J. Darlington 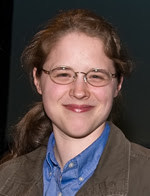 C. J. is the award-winning authof of Thicker than Blood, Bound by Guilt, and Ties that Bind. She has been in the antiquarian bookselling business for over fifteen years, scouting for stores similar to the ones described in her novels before cofounding her own online bookstore.
In 2006 C. J. started the Christian entertainment Web site TitleTrakk.com with her sister, Tracy, and has been actively promoting Christian fiction ever since. She is a regular contributor to Family Fiction Digital Magazineand NovelCrossing.com. A homeschool graduate, she makes her home in Pennsylvania with her family and their menagerie of dogs, a cat, and a Paint horse named Sky. Visit her Web site at www.cjdarlington.com.


There’s nothing like rare books. I’ve been fascinated with them for years, so when I began writing my first novel Thicker than Blood I had fun picking a few to include in the story. A first edition of For Whom the Bell Tolls by Ernest Hemingway made the cut and played an important role in the plot of the story. For my second novel Bound by Guilt the rare book I chose was The Great Gatsby by F. Scott Fitzgerald. First editions with their dust jackets can be worth $30,000, and in fact it’s this value that catches the eye of a family of book thieves…

For my latest novel Ties that Bind I thought long and hard about what rare book to use in the story. I knew I wanted a book that would be integral to the storyline. I considered many, but when I discovered that the 1811 first edition of Jane Austen’s Sense & Sensibility was originally published in three volumes, like many novels of the time period, my wheels started turning. What if a father gave each of his daughters one of the volumes as a gift? What if the books were the catalyst to bring the sisters, one of which didn’t know about the others, together?

It was such a fun twist to write about! All my main character Brynn Taylor knows about her father is his name and the fact that he gave her volume three of the set. It’s an address she finds in the back of the book that sets her down her path of discovery not only of her two sisters, but of the God she long ago turned her back on. 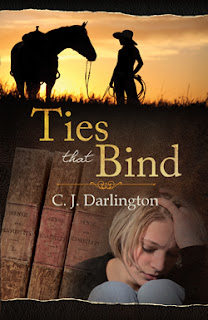 Ties That Bind
By
C.J. Darlington

On a quest to find her father, a young woman discovers she has two sisters who have no idea she exists.

Newly released from prison, Brynn Taylor is determined to find her father, a man she's never met. Her only clue to his whereabouts is an address she finds in a rare volume of Jane Austen's “Sense & Sensibility” which he inscribed to her years ago. Armed with a bus ticket, a backpack, and her grandfather's gun, her search leads her to Elk Valley, Colorado where her plans and her life begin to unravel.

When Brynn Taylor was released from prison, she didn’t expect anyone to be waiting for her.

“There she is!” a voice shrieked from across the parking lot, and a woman with a head full of tight, black corn rows and a toddler hugging her hip jogged toward Brynn. Following on her heels was what looked like a parade procession of extended family, all dressed in bright, starched clothes they could’ve just worn to church.

Brynn froze, a coyote in the headlights of a Hummer. Recognition flashed in the woman’s face, but Brynn didn’t have a clue who she was. The gal let out another squeal running toward her, the kid’s head bobbing.

But then the woman and her entourage whooshed past Brynn, and she swung around to see another inmate emerging from the doors of the Denver Women’s Correctional Facility. Within seconds, the whole crew swallowed their loved one in a group hug, and Brynn couldn’t see her through the mass of family.

She heard the cries of joy.

Brynn stuffed her hands into the pockets of her new jeans. They felt stiff and scratchy against her skin, and her t-shirt was a size too large. In at nineteen, out at twenty-four, and she’d gained less than five pounds. She probably could’ve still fit into the clothes she’d come in here with, but they’d no doubt been dumpstered years ago.

"Thank you, Lord!” Someone’s hand shot up to the sky, waving gratitude.

She wondered how long the other inmate had been inside and what crime she’d committed. Was she a druggie caught making a buy? A hooker who’d propositioned the wrong john? The majority of the women here were low-risk offenders, but many had been inside before. Most would be again.

For a second, the sea of family parted and Brynn caught sight of the newly released prisoner, her face streaked with glassy tear lines. She was clinging to an older woman.

Brynn turned away, her second-hand sneakers silently carrying her across the parking lot away from the huddle. Their happiness swirled around her, a slicing reminder there were no welcoming arms for her.

She lifted her face to the sky where gray clouds threatened to dump much-needed June rain. She hadn’t expected to cry, but standing in the open air free of steel doors and walls, unwanted tears came. No more would her world be defined by gray cinder blocks scratched with obscene words. There’d be no more violating strip downs from guards searching for contraband, and exercise would no longer mean walking the perimeter of a pen topped with razor wire.

There also wouldn’t be anyone to keep her out of trouble. Everything was up to her now, which scared her more than anything. The last time she’d been on her own she’d ended up handcuffed in the back of a police car.

Brynn closed her eyes. Everyone assumed she’d refused parole and maxed out her sentence for the assurance of three squares a day. But really, fear was why she’d stayed. At least behind bars she knew what to expect and what was expected of her. Out here . . .

She blinked a couple times and pulled in a deep breath. Reaching into her pocket, she fingered the lone silver key they’d returned to her along with her empty wallet and expired driver’s license. Out here she was free all right—to wreck her life all over again.
# # #
Brynn walked briskly through the gate of Ames Self Storage and made her way to the last unit with the green, garage-style door. She had no idea how her mother had managed to pre-pay for this spot years in advance, but Brynn was sure glad she did. She’d have nothing without it.

She unlocked the door and wrenched it open. When they’d moved from their country house into the smaller rental in town to be closer to the hospital, anything that didn’t fit had ended up here.

She pictured the unit as it had once been—crammed with treasures like the family-sized dining room table Mom hadn’t been able to part with, the decorative chairs that matched, Grams’ antique set of silverware she’d received as a wedding gift, and a carved wooden chest that had belonged to an ancestor who crossed the Atlantic from Germany.

They were all gone now. Years ago, Brynn had scattered those precious heirlooms her mother and grandmother had hoped to pass on to her across the city’s pawn shops. She tried not to think about that as she gathered up their old camping gear, some of the few items she’d managed to hang onto. It was no-name stuff, but it had served Mom and her well on their numerous hikes and weekend trips. Luckily, most of it was compact hike-in stuff they’d gotten cheap at a going-out-of-business sale. She’d pawned anything of real value, and what was left was the bare minimum—sleeping bag, two-person tent, and a few cooking utensils.

Kneeling on the cold cement, Brynn stuffed her hand into the sleeping bag’s pouch. Still tucked safely between the down layers, she found her grandfather’s Smith & Wesson .22. She’d pawned it twice but always went back for it.

Brynn ran her fingers across the tooled leather holster, then unsheathed the gun, flipped open the cylinder, and spun it. She could still smell the oil from the last time Mom cleaned it, and a wave of grief washed over her. If she’d kept her promise to her mother she would’ve avoided all the heartache of the last six years.

Slipping the gun back into its sleeping bag cocoon, she made sure the half-full box of bullets was with it. One more thing to grab, and she could escape from the memories this place entombed.

She found the old book inside a file box of ancient tax records. The boards were a blue/gray paper over something like thick cardboard, and the tan spine had a pinkish label that said: Sense and Sensibility, with the number “3” beneath that.

Brynn carefully slipped the volume into the folds of the sleeping bag with the gun. This book was all she had of her father, a man she couldn’t even remember.

It was also her only hope to find him.
Copyright 2013 C.J. Darlington
Published by Mountainview Books, LLC
Order: