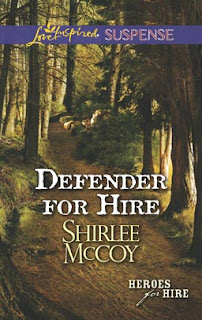 Defender for Hire
by
Shirlee McCoy

Someone was watching her…

No matter how many times Tessa Camry moves, her mysterious tormentor always finds her…and leaves a grim reminder of all she's lost. But this year, no longer content to deliver roses, her stalker wants her dead. When former soldier Seth Sinclair becomes her bodyguard, he encourages her to stand her ground, even if it means letting go of long-held secrets. Seth realizes that Tessa may be his second chance at love, but their future depends on finding the man determined that Tessa never forgets the past….