“Cream” of vegetable soup in the blender

April 16, 2013
(YES, I’m still on that veggie kick.) It was too cold for a green smoothie, so I was looking through the Blendtec recipe book and thought I’d try the “soups” setting. They have a handful of soup recipes, but I took the Raw Vegetables soup and altered it.

We got beets and beet greens in our organic co-op, so I used the pressure cooker to cook them (you could probably use the microwave or a regular pot but I had my pressure cooker out already because I’d recently made chicken stock with it). I also threw in some fennel and leeks with the beets and beet greens. You could throw in whatever veggies you happen to have in the fridge. Even a mix of veggies would probably taste good in this.

Then I threw some chopped garlic in the blender (I should have added it with the veggies when I cooked them but I forgot) along with 2 cups of chicken stock. I added the veggies plus one tomato and hit the “soups” button.

A minute later, I had “cream” of vegetable soup! And it was low fat! And I got something like 5 servings of veggies in the entire batch! 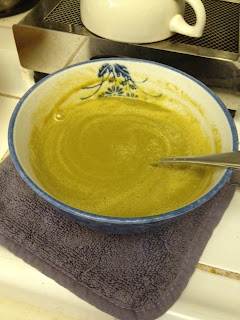 It made about 4 cups of soup, and I drank the entire batch. According to SparkPeople.com, the entire batch was only 300 calories. It was a little watery so I might try adding less chicken stock next time.

I added cumin, salt and pepper but you can add whatever spices or herbs you want. Next time I might try curry powder. Do you guys have any suggestions?