March 04, 2013
After my first foray into green smoothies, I made them for a while but then stopped. But then my cousin talked about how his cholesterol dropped when he started juicing, so I took up my green smoothies again. It’s hard for me since it’s cold here in California, and I don’t like drinking cold smoothies when I’m cold. (Captain Caffeine, on the other hand, tends to “run hot,” so he’s always happy to have ice in what he drinks.)

Anyway, I’m also trying to be good and use up the veggies and fruits we get from our organic coop. A couple weeks ago, Captain Caffeine brought home some grapefruit from a coworker and I also wanted to use that.

Grapefruit pith is bitter, so I squeezed the grapefruit juice into our Blendtec juicer. Then I added two apples (cored and sliced), a handful of kale leaves (stalks removed), a ginormous spoonful of honey, and a couple tablespoons of cashew butter.

I got the idea for the nut butter because my mom always loved the Ono Ono strawberry shake from KC Drive Inn in Hawaii, which adds peanut butter to the strawberry shake. I didn’t think it would taste that good but I ended up really liking it. So in making this shake, I thought, why not add some nut butter and see? 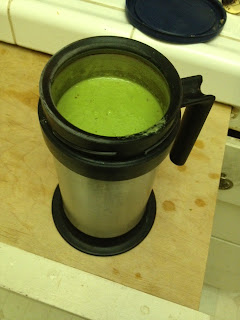 Yes it looks like a swamp but it actually tastes good. The cashew butter gives it a slightly nutty taste that pairs decently with the citrus.