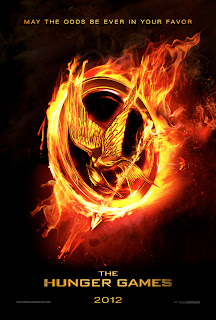 My friend Sarah went to see The Hunger Games with her daughter on opening night, but how about any of you? Who’s seen the movie? Read the books?

I admit I only read the books when I heard all the hype about it, and I really like the first book. The social commentary was so fascinating. But I’m in the middle of Catching Fire and must admit I’m not as enthralled. I’ll probably get slammed for saying this, but I don’t really see what’s so heroic about Gale that she loves him so much. He actually seems a bit selfish much of the time.

As girls, we shouldn’t just fall in love with any guy who seems halfway interested. Even if he’s madly in love with you, look at his heart. Is he heroic? Does he show the kinds of qualities God would admire? And I’m not talking piety. That’s totally different from heroism.

He should put God first and you second. He shouldn’t be a doormat, instead he should help you do the right thing even if it’s painful for him and for you. I think that’s heroism.

So far, in the little I’ve seen of Gale on the page, he’s just not heroic to me. He’s a rebel, which can be attractive, but he’s a bit selfish. Maybe because one of the first things I see him doing in the book is talking to Katniss about running off together, leaving their families behind. I understand WHY he wants to do this. Yes, his life is hard, and it’s tough for him to see Katniss and Peeta together, but he never told her he loved her, and it wasn’t his name picked at the Reaping, was it? He doesn't know anything about what Katniss and Peeta had to do to endure.

So do you agree or disagree with me?