Excerpt and guest post: The Wounded Heart by Adina Senft

September 28, 2011
Camy here: Here's another book I added to my Street Team book giveaway list! What's more, Faithwords has graciously given me FIVE copies to give away! You can win this book by joining my Street Team--Click here for more info! 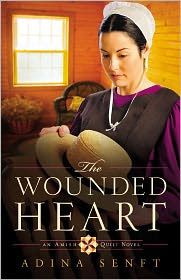 The Wounded Heart
by
Adina Senft

When a business offer turns into something more personal, Amelia is torn between what logic tells her is right, and the desire of her heart.

A widow with two small children, Amelia Beiler is struggling to make ends meet. She is running her late husband's business, but it's not what she was raised to do, which is run a home. When she gets an offer for the business from Eli Fischer, she's only too relieved to consider it-especially when it looks like Eli's interest might include more than just the shop. But when she begins to experience strange physical symptoms and is diagnosed with multiple sclerosis, it's difficult not to question God's will. If she pursues the treatment she believes in, she risks going under the bann. But how can she allow Eli to court her when she can't promise him a future?

Includes instructions to make the quilt block featured in the novel.

Thanks so much for hosting me, Camy! When I got the idea for The Wounded Heart, I knew there would be some research involved. What I didn’t know was how much research there would be! Along with reading anthropological studies and history books and books about my location (Lancaster County), I traveled there to find out details—things that aren’t in the books.

Take women’s clothing, for instance. To an Englisch person, it looks like the women are all wearing the same thing … but they’re not. The tiniest details make a statement, and it’s usually a statement about the depth of their submission to the Ordnung (the unwritten rules of their community).

All the women wear a prayer covering, or Kapp, because it says in the Bible that a woman should have her head covered when she prays. The theory is that an Amish woman can pray at any time, so she’s always covered just in case. But are the strings on her Kapp tied or not? If they are, it shows she’s submitting to the Ordnung. If they’re not (which in the case of the teenage girls, is pretty much all the time), the girl may be on Rumspringe or just pushing the rules a bit. If the strings aren’t even cut, but form a U so they can’t be tied, well … maybe her mother is going to have a talk with her rebel daughter!

The colors of the dresses say something, too. I learned to drive a buggy with an Amish man, who frowned at a girl on the side of the road wearing a beautiful golden yellow dress under her black bib apron. I said, “I thought the girls wore darker colors. I’ve never seen that yellow before.” He shook his head. “North of Highway 340 the rules are lax and the girls get away with too much. South of the highway it’s a different district and the women dress more modestly.” I realized the meaning of what I’d been seeing. North of the highway the girls were wearing yellow, peach, and turquoise. Down south, they wore dark green, taupe, and blue. And if he hadn’t said anything, I would never have known why.

I’m a firm believer in onsite research. You never know when you’ll run across exactly the right detail to color in your people and your setting—and make them come alive.