Excerpt - FOREVER AFTER by Deborah Raney 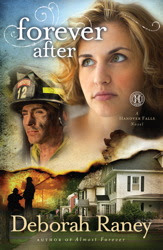 Forever After
by
Deborah Raney

A fire killed his best friend and his lifelong dream of being a firefighter. The same fire killed her husband and hopes for a family. Can new dreams replace old?

Lucas Vermontez was a proud firefighter like his father. Now, not only has he lost his father and his best friend, Zach, in the fire at the Grove Street homeless shelter, but the devoted rookie can no longer do the work he loves after being crippled in the tragic event. When friendship with his buddy's beautiful widow turns into more, he wonders, what could he possibly offer Jenna? Jenna Morgan is trying to grieve her husband's death like a proper widow, but the truth is, she never really loved Zach. His death feels more like a relief to her. But that relief is short-lived when she loses her home and the financial support of her in-laws. Now the secrets of her past threaten to destroy her future.

Can the two forget the painful past and discover new reasons to live and love?

Forever After is the second book in Deborah Raney's Hanover Falls Novels series from Howard/Simon & Schuster. The first novel in the series, Almost Forever, won the Gayle Wilson Award of Excellence and a HOLT Medallion Award of Merit.

DEBORAH RANEY's first novel, A Vow to Cherish, inspired the World Wide Pictures film of the same title and launched her writing career after 20 happy years as a stay-at-home mom. Her books have won numerous awards including the RITA, National Readers Choice Award, HOLT Medallion, the Carol Award, and have twice been Christy Award finalists. Deb also serves on the Advisory Board of the 2500-member American Christian Fiction Writers. Her 20th novel released this month from Howard/Simon & Schuster. She and her husband, Ken Raney, enjoy tending wildflowers and native grasses in the Kansas prairie garden in their large back yard. They also love traveling together to conferences, and to visit four children and three little grandsons who all live much too far away.

Browse Inside : Forever After