Excerpt - Cowboy for a Rainy Afternoon by Stephen Bly

An excerpt from
COWBOY FOR A RAINY AFTERNOON
By Stephen Bly
Summary:
A 10-year-old boy with red straw cowboy hat, cap gun, and silver-painted wooden bullets. Six story-telling, cribbage playing old cowboys. A ’49 Plymouth with open trunk. A damsel in distress. All the fixings for a summer’s day adventure at the Matador Hotel in 1954 Albuquerque.
Maybe you weren’t born 100 years too late! 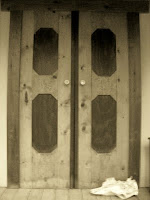 The Matador Hotel died on July 5th, 1965, but they didn’t bother burying it until last fall.
New Mexico heat blanketed Albuquerque that July like too many covers in a stuffy cabin.  The kind of day that you sweat from the inside out and feel sticky dirt in places that you don’t ponder much except in the shower.  I reckon that four-bladed overhead fan that squeaked like an unfed cat failed to console Shorty McGuire.
Doc Boyce said he passed on durin’ the night, but no one discerned it until they observed the empty back table at the Round-Up Café.  For the last nineteen years of his life, Shorty lived in a second-floor room at The Matador.  At straight up 6:00 a.m. ever’ mornin’ he ate two eggs fried hard under the faded picture of Theodore Roosevelt leading the Rough Riders up San Juan Hill.

As a boy, I calculated that Shorty McGuire and the others must be pushing a hundred-years-old when I met them for the first time in 1954.
I reckon I surmised wrong.
The Albuquerque Herald  reported that Hadley (Shorty) McGuire was only 86 when he died on that July day in 1965.  The Herald  is right most of the time.
As the last of that bunch at the Matador, there was no one left to take his trappings, so Whip Johnson and me cleaned out Shorty’s goods a few days after his funeral.  Whip managed the hotel in the 60s for his Uncle Durwood Johnson who gained some fame in the Southwest on the rodeo circuit after the war.  He won the hotel on a bet on a black half-thoroughbred stallion down in Magdalena.

The floor of Shorty’s little room with one four-pane slide-up window was carpeted solid with six to eight inches of newspapers, not a one newer than 1939.  He claimed that cowboyin’ didn’t provide the time to read much, so he saved them for his retirement.  I never did know if he got caught up.
We didn’t have the nerve to give his tattered clothing to the Rescue Mission, so we chucked them into the hotel incinerator.  We crated his boots, wooly chaps and battered Stetson, then donated them to the state museum.   I had a notion they would want to display the gear of an old-time cowboy.  But they stored them in a back room for a few years, then sold them at an auction to raise money for a modern art statue that looks like the scrap-iron pile out behind my barn.  If I’d known they were selling Shorty’s belongings, I’d have bought those suckers myself and buried them, rather than let some car dealer in Denver drive off with ‘em.  But that’s the way the past is.  You can’t hang on to it all.  What survives gets stolen by strangers who have no blasted idea of what they hold in their hands.
The tobacco-stained furniture in Shorty’s room belonged to the hotel, but Whip decided to replace it all and re-carpet.  So they moved in newer furniture, but I don’t think the room was ever repainted.  Whip and me always thought that room smelled like Lordsburg, but that might be its location on the south side of the hotel, facing the Santa Fe tracks.
I never went back to the hotel after that day.  The hippies ran it in the early 70s, then some drug dealers.  I think one of them big moving companies bought the place and used it for storage for a decade or two before they tore it down last year.  All them red bricks got shipped to the west side for deluxe estate fencing around an upscale gated community.  I hear they decided to build urban condos on the old hotel site for rich city folks, but I can’t figure what kind of people would want to live in downtown Albuquerque.

At least, not nowadays.
I still have Shorty’s rim-fire saddle hangin’ in my tack room.   It was one of the first ones Estaban Chavez built, when he still had that shop behind the Chinese laundry in Las Cruces.  Lots of folks have wanted to buy it over the years, but it doesn’t belong to me.  Some day Shorty’s kin will show up wantin’ his things, and I’ll have it ready.  I keep the leather oiled.  Shorty died almost forty years ago, but I’ll hang onto it for him.
That’s the way things are done around this part of the country.
It’s one of the lessons I learned in the lobby of the Matador Hotel.
Excerpt from Cowboy For A Rainy Afternoon by Stephen Bly, Copyright©2010 by Stephen Bly. All rights reserved.
######
Comments about previous Stephen Bly novels:
"I have always been a fan of Louis L'Amour but I must say your book is as good if not better than anything of his. I shall remain a fan of Stephen Bly." --Jimmy Dickens, Grand Ole Opry
“Bly offers a kinder, gentler Western that should appeal to fans of Louis L’Amour.”  -- Library Journal