Excerpt - THE GUY I’M NOT DATING by Trish Perry 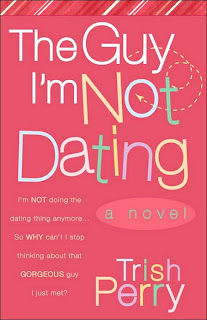 The Guy I’m Not Dating
by
Trish Perry

“Yowza!” exclaims Kara Richardson when she sees the handsome proprietor of the new delicatessen in town, Gabe Paolino—who soon expresses mutual interest. This would be the start of a perfect love story, except for one thing—Kara has vowed to stop dating until she feels God’s leading.

But when humorous circumstances send Kara and Gabe on a road trip to Florida, hope springs anew. Even with Kara’s flirtatious coworker Tiffany—“a hyena in heels”—along for the ride, the uncouple begins a lively journey that could change their paths forever.

This memorable, charming story of love’s persistence captures the honor of waiting on God’s timing, and the adventure of finding the perfect guy to not date.