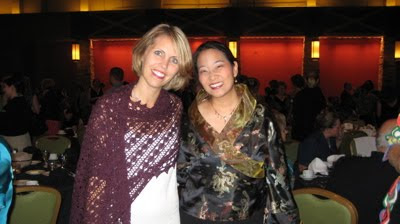 And now, here’s me and Cara!

Cornhusker Dreams is a compilation of your three Nebraska WW2 historical romances (three for the price of one!). For each of the three books, tell us what you liked best about writing each story.

Canteen Dreams was very special because it is based in part on my maternal grandparents story. My grandmother would tell you I borrow their names, but there is more to it than that -- I wanted to honor my grandparents and their generation. I am humbled and amazed by their sacrifices. I also thought the North Platte Canteen was an amazing story that reinforced how special that generation and that time was. It also gave me the opportunity to pay tribute to the role my hometown played in the war.

Sandhill Dreams shifts focus to the northwest corner of Nebraska and the tiny Fort Robinson. While it has played many roles during the years, its job in World War Two was to train war dogs and pack mules. I focused on the war dog angle -- another fascinating aspect of the war. Imagine shipping Buster or Bowzer to the Army to serve during the war. That's exactly what happened.

Captive Dreams turns to the Prisoner of War camps that dotted Nebraska and other parts of the Midwest. I highlighted Camp Atlanta and the Kearney Airfield. During the war, the Dust Bowl years disappeared. There were bumper crops just as the young men disappeared and many other of the able bodied found jobs in the factories. The military was capturing Germans and needed a place to put them, so many ended up in the Midwest farm country. Absolutely fascinating!

While those are the historical backdrops, each story is primarily the story of the romance between a couple caught in the war. Willard and Audrey, and his need to serve even though he can't. Tom and Lainie, and her need to be useful even when it seems like God has killed her dreams. And Anna and Sid and her need to save the family farm while working in a factory. Each of those couples is pretty special to me.

Who was your favorite hero and why?

Willard. He's based on my grandpa, though I don't know if Grandpa struggled with being drafted 4 times and then being sent home because he was the only son of a farmer. Can you imagine that in an environment where many families had multiple sons fighting? But there are so many ways we can lay down our lives for other, and that's what Willard wrestles with.

Who was your favorite heroine and why?

Hands-down it's Lainie. I wrote this book while I was in the middle of God blessing the dream of writing, yet also experiencing the death of a dream through a miscarriage. My world rocked, and I struggled to find God and stand on His promises and truth. Lainie's struggles aren't those. But together we wrestle with God and where He went when our dreams died. She just had more spunk than I did. She's a fun character and readers really seem to connect with her.

Thanks so much for having me, Camy. These books are so special to me... Romances set during my favorite time in history in my favorite state. And now people can find them in one volume: Cornhusker Dreams. And if they want to learn more about me or read the first chapters, your readers can explore my website: www.caraputman.com

Camy here: Thanks for being here, Cara! 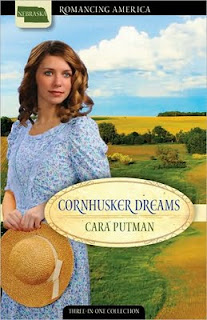 Dreams Are Altered on the Nebraska Home Front

World War II changes the dreams and aspirations of three young women who seek to enter the war effort.

Audrey Stone is a schoolteacher who joins a train station canteen to lend her support to deployed soldiers. Local rancher, Willard Johnson is ready to go to war to avenge his brother’s death. Can Audrey and Willard fight the demons of war together?

Lainie Gardner’s health won’t allow her to serve as a nurse in the war. Tom Hamilton was turned down as a trainer of war horses. At Fort Robinson, can these two come together to build new dreams that will make a difference in their world?

Anna Goodman struggles to care for her father and the family farm alone. Specialist Sid Chance is stuck on the plains overseeing German prisoners of war. Can Anna and Sid learn to trust and depend on each other?

Can these couples find their place in the war effort and realize the gift of love on the home front?

Buy from Christianbook.com
Buy from Amazon
Buy from Barnes and Noble
Buy from Books a Million