Excerpt - FLEE THE NIGHT by Susan May Warren 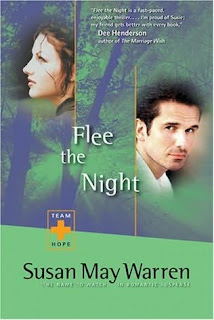 Flee the Night
by
Susan May Warren

The past could not have picked a worse time to find her.

When Lacey Montgomery boarded the train with her six-year-old daughter, she never expected to wake up hours later handcuffed to a hospital bed and under investigation by the National Security Agency. Lacey, an ex-CIA operative, is a liar, a murderer, and a fugitive. Or is she? With no idea whether her daughter is alive or dead and nowhere to turn for help, Lacey contacts the one man she believes she can trust. A man who is convinced that Lacey betrayed her country and murdered her own husband.

Now Lacey must prove to Jim Micah, an ex-Green Beret, that she is not who he thinks she is. As Micah is drawn further into Lacey’s world of aliases, covert ops, and espionage, he must face the questions and pain of his own past.

Only by trusting God and daring to trust each other can Lacey and Micah flee the secrets of the night.

Buy from Christianbook.com
Buy from Amazon