Naturally, since I’m giving away healthy living books today, I have to blog about food. LOL

I have never had mincemeat, although I read about them in my Regency historical romances and I had an English coworker once who described them to me. I know they’re traditionally eaten at Christmas, and I wanted to try one at some point but never had the opportunity. 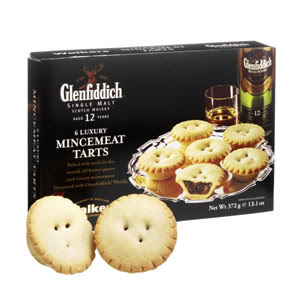 Then Captain Caffeine saw this box of commercially made mincemeat tarts at Marshall’s right after Christmas.

The fact they’re made with Glenfiddich single malt scotch whiskey is the main reason he bought it, but it happened to coincide with my desire to try mincemeat.

So we heated them up according to the package directions and tried them.

They weren’t bad, but BOY OH BOY was the whiskey strong in those puppies. I liked the currants in them, but Captain Caffeine didn’t care for them because he dislikes raisins, and the currants were too much like the texture of small raisins for him.

All in all, an interesting flavor but not mind-boggling. I’d probably feel differently if they were homemade and fresher, but it was good just to try.

Anyone who likes mincemeat out there?