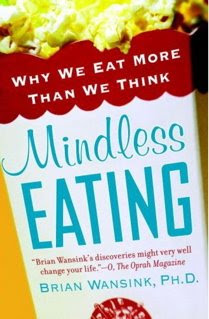 I just finished the book Mindless Eating by food psychologist Brian Wansink and it was fascinating, although I can't say I think everyone would find it so.

The book is written by a food researcher, so he goes into a lot of the experiments he did to show human psychology as it relates to our eating habits.

For example, he proved through his experiments that we are more likely to eat by responding to visual cues than to taste or how our stomachs feel.

Here's an experiment that I thought was cool: He had people separated into two groups, and brought each person into the lab under the pretense of giving feedback on a video. In return for the feedback, that person could have as many M&Ms as they wanted.

Now, M&Ms taste the same regardless of color, so you'd think the average amount of M&Ms eaten would be the same in the two groups, right? Both bowls had the same amount of candy, just different numbers of colors.

Each person in the 11 color group ate a larger amount than people in the 7 color group. The difference between the average amounts eaten was statistically significant, in fact.

Basically, it means that we respond to visual cues when we eat--the more visual variety, the more we'll eat, and we won't even realize it.

He goes into other stuff, too, and the best part is that he gives practical tips for how the results of his studies can be applied to daily living and losing weight.

Another thing that was really fascinating was that a lot of his studies and findings jived perfectly with the French Women Don’t Get Fat book that I've raved about before on this blog (part one and part two). It was really neat to see scientific studies that explained why the tips in the French Women book work in terms of human psychology.

Captain Caffeine says the Mindless Eating book appeals to my scientist side. He's probably right. I thought it was a fantastic book and I liked seeing all the experiments he did. His practical advice is also down to earth--small things that I can do to slowly lose weight and change my eating habits.

I personally liked this book, but I can't honestly say I think everyone will like it, because of the emphasis on the scientific studies.