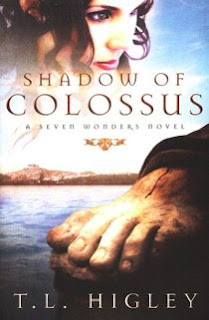 Shadow of Colossus
by
T.L. Higley

In a world enslaved by money and power, one woman dares to be free. Will an explosive secret enslave her again?

The place is the island of Rhodes; the time, 227 BC. In the ten years that Tessa of Delos has been in bondage as a hetaera, a high-priced Greek courtesan to a wealthy politician, she has learned to abandon all desire for freedom and love. But when her owner meets a violent death, Tessa is given the chance to be free—if she can hide the truth of his death and maintain a masquerade until escape is possible.

Now Tessa must battle for her own freedom and for those she is beginning to love, as forces collide that will shatter the island’s peace and bring even its mighty Colossus to its knees.

What a terrific picture of ancient Greece! I love unique and interesting settings for historical novels, and this intrigued me from the moment I read about it.

I know practically nothing about the setting (Rhodes) or the time period, but the author makes them both come alive for me. There are a few unfamiliar words that are cleverly explained so that I feel like I’ve been seamlessly immersed in this new world.

The heroine’s painful past of being sold into high-priced prostitution made me immediately care for her. Her stony heart, a self-defense mechanism against the pain she has received, made me ache for her.

The hero, the bastard of a wealthy, powerful man who has just been recognized by him as his son, is not as vividly drawn as the heroine but still very intriguing. His poor past combined with his recent elevation to wealth and power makes him an interesting character.

The secondary characters are all just as unique and memorable. Overall, a stunning cast.