Interview - THE MIRACLE GIRLS by Anne Dayton and May Vanderbilt 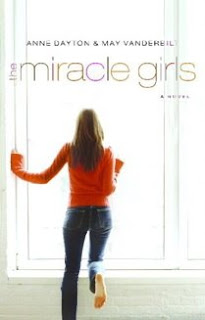 Today, I have a special interview with Anne Dayton and May Vanderbilt about their latest young adult novel, Miracle Girls!

Ana Dominguez was happy in San Jose, but everything changed when her dad moved the family to Half Moon Bay, California, to open a law practice. Her parents think she's settling into her new school nicely, but she has them fooled. Riley, the most popular girl in school, has picked Ana as enemy #1, and Tyler, Ana's crush, doesn't even know Ana exists.

When Ana ends up in detention with Riley, her life suddenly changes. When Ana, Riley, Christine, and Zoe share their essays on "The Day My Life Changed," it turns out they have more in common than they ever would have imagined. Now as Ana lives out her faith, she and Zoe are determined to befriend Riley and Christine. But the drama of high school life has only just begun. . . .

What inspired the story of The Miracle Girls?

Anne: I used to be obsessed with this now-defunct magazine for teen girls put out by Guideposts called Sweet Sixteen. It featured true, real-life stories from real girls, and sometimes the stories were about girls surviving things that should have killed them—a car falling in a ravine, or a sickness miraculously healed. I started to wonder about those girls, and what it would be like to live after surviving something like that, knowing that God had spared you. That’s where the idea started.

May: The older I get, the more interested I become in the super-natural side of life. Ghosts, near-death experiences, etc. I blame it on watching too much Lost, personally. And so with this series I wanted to get more in touch with the mystical side of Christianity, the ineffable moments that we all experience when it seems that God has moved. Also, high school still feels really fresh in my mind, the cliques, the crushes, and, of course, the drama. It was a lot of fun to relive the horrors and triumphs of my own experiences.

What is your favorite scene from the book (one scene for each of you)?

Anne: One time in college my friends “taught” me to ski by taking me to the top of a mountain. I think they really thought I would just pick it up without any kind of lesson or anything, but after tumbling halfway down the mountain, I gave up and rode the rest of the way down with the guy who came to save me on the snowmobile. Amazingly enough, Ana has a very similar experience in this book (where do we come up with this stuff??). That one was fun to write, because, well, revenge is sweet.

May: I think I might have fallen in love with Ana’s boyfriend in the book. On paper, he seems so wrong for her, but he ends up being exactly the kind of guy she needs. My favorite scene would be one Anne wrote, when they finally get together. I won’t give away anything else!

If your heroine were a candy bar, what would she be and why?

May: Ana would never approve of being something like a candy bar. She’s going to Princeton. Haven’t you heard? And they most certainly do not let candy bars into Princeton.

Anne: Maybe she’d be Nerds: fun and sweet and tart (did I just call our heroine a tart?) but still, well, a nerd.

If each of YOU were candy bars, what would you be and why?

Anne: I’d probably be something really boring, like just straight-up chocolate. It’s reliable, but nothing fancy.

May: I have to choose just one? I guess I would have to say a Snickers bar, because I love to please everybody and I’m a little nutty.

Anne: Ooh! I just got back from mine. We went to Cape Cod for a week, and all we did was sit by the beach and eat ice cream and read mountains of books. It was bliss.

May: My honeymoon! We’re going to Thailand in November for two straight weeks. We’re going to explore vibrant cities, amble through the jungle on an elephant’s back, take cooking lessons, and scuba dive!

May: Is Zac Efron getting cuter every second? Is that just me? Anybody want to see HSM3 with me in the theaters?

Camy here: LOL Thanks, Anne! And May, I would see HSM3 with you! I would probably see it with the high school girls at my church if they asked me to join them (I might be a liability to their rep).