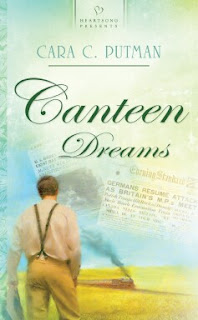 In the aftermath of Pearl Harbor, Audrey Stone wants to help in the war effort. But what’s a young schoolteacher from Nebraska to do? When her community starts a canteen at the train station, Audrey finds her place. She spends nearly every spare moment there, offering food and kindness to the soldiers passing through. Despite her busyness, Audrey does allow some time to get to know a handsome rancher.

Willard Johnson worries about his brother who joined the navy to get off the ranch and see the world. When Willard’s worst fear is confirmed, he feels he must avenge by enlisting himself. But will his budding relationship with Audrey survive the war? Or will one of the many soldiers at the canteen steal her away from him? Can two such determined people find their place in the war and with each other?

This is one of the best historical romances I’ve read this year! There’s something about the World War 2 era that is very poignant for me, maybe because my parents and grandparents were living in Hawaii when Pearl Harbor was bombed.

The sadness associated with the soldiers who stop at the canteen and the emotions of losing loved ones made this book really stand out for me. I teared up quite a bit (although I should post a disclaimer that I tend to cry at movies and commercials all the time).

This book really brought the time period alive for me. The atmosphere of “days gone by” was beautifully drawn like a good watercolor painting.

I will go out on a limb and say this book reminded me of my favorite Grace Livingston Hill romances, which showcase a simpler time, strong faith, and lots of conflict that’s always resolved by God’s grace. GLH’s books are typically set earlier (WW1), but the mood of Canteen Dreams seemed very similar to me.

There were a few scenes that I didn’t quite understand the characters’ actions and motivations, but they’re in the second half of the book, so I won’t spoil anything for you.

The writer’s voice is fresh and it totally pops. I loved the dialogue and the way the story flowed from scene to scene. I can honestly say this is one of the best books I’ve read this month.

The story is appropriate for junior high school girls, although the 1941 time period might confuse them if they’re not familiar with their history. This was a very entertaining book!