So, remember I talked about old cookbooks from Goodwill? Well, I got another one, this one by some Italian brothers I’ve never heard of, but the cookbook was titled Pasta so who could resist that?

There was an interesting recipe I’d never heard of before, spinach and cheese dumplings. Basically you make cooked spinach into a paste with ricotta cheese, parmesan cheese, and a spice mix of pepper, ginger, cloves, and nutmeg. You coat the dumplings in flour and boil them, kind of like gnocchi.

Well, guess what? The paste was a bit more watery than I expected, even though I had squeezed the water out of the spinach, and then the dumplings disintegrated. I had boiling green water.

I didn’t want to waste the entire batch of paste—after all, it was a pound of spinach and a cup and a half of ricotta. So, inspired by hush puppies, I busted out my Fry Daddy.

I added cornmeal and flour to the paste, which made it less watery but still not-dough, coated the dumplings with flour, and then deep fried them instead of boiling them in water.

They weren’t bad, if I do say so myself. Very soft inside, with a thin crispy outside. The cheese makes it a little gooey.

But here’s the kicker—the paste is bright green. Not just slightly green or dark olive green, but neon alien anti-freeze green. The fried flour coating makes it a bit brownish green, but once you bite into it, it’s blinding. 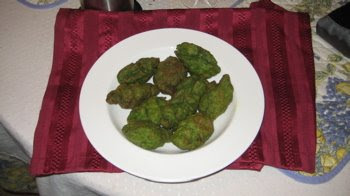 Because the paste was so not-dough, I couldn’t shape it much and so the dumplings turned out to look a bit like turds. Sorry if that’s TMI, but that’s the first thing Captain Caffeine and I said when we saw the finished products.

But if they taste good, that’s all that matters, right?